We’ve all heard, “freedom isn’t free.” I certainly grew up hearing that phrase in my hometown—a Midwestern, red-blooded farming community in Illinois. Even as a child, I understood that for me to experience the freedom I had in my life, someone, somewhere had to make a sacrifice.

I’m grateful I grew up in a patriotic community, but even that upbringing did little to prepare me for the reality of what serving in the military would look like. I joined up at 20 years old with no idea what I was getting into. Really, all I can tell you is I joined the US Navy because I wanted to marry my fiancé Stephanie, and I figured I had to have a job to get married! That, and my grandfather, a Navy vet himself, always said, “In the Navy, you’ll always have three hots and a cot,” meaning, you’ll always have three hot meals and a place to lay your head down at night.

But there’s more to life than “3 hots and a cot.” Military couples have emotional, spiritual, and relational needs the same as our neighbors next door—plus some additional challenges. According to a 2018 study, 48 percent of military members and families feel they don’t belong in their local community. Why? Because military families move so often, they tend to have trouble establishing a support structure. 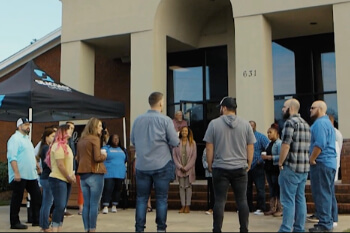 It can be too easy to take for granted that if you have a need, you’ve got somebody nearby to help. When you need a date night, you drop the kids off at the grandparents. When hard times come, family and friends gather in your living room to listen and figure things out. When the kids have a school play, family members are there to cheer them on. After all, it takes a village, right?

You get the picture; military life is often lonely, a bit isolated. But, it doesn’t have to be. Sometimes we all just need a little nudge toward community.

For us, the nudge came in the form of an invitation. After basic training, I was shipped off to the Naval Weapons Station in Goose Creek, South Carolina, for naval nuclear training. The catch: my new bride was stuck back in Illinois. That’s when I met Kat, who worked at the Personnel Support Detachment. My wife and I didn’t know it at the time, but Kat would change our lives.

Kat was assigned to help us get moved down to the Charleston area—and that she did—plus so much more. Have you ever had that feeling when you met someone that you shared something in common? Well Kat had that sense, and she asked me directly if I was a Christian. Learning I was, she wasted no time in inviting me to church. But, here’s the thing: Kat had a fairly thick accent, and I was convinced I had been invited to SeaGHOST Church. I thought, “Boy, if they put ghost in the name, it might be a little too out there for me!” So, I said, “Maybe when we get back from Illinois.”

But Kat wasn’t one to take ‘no’ or ‘maybe’ for an answer, and eventually we decided to go. I remember driving down Long Point Road for the first time and spotting the sign for SeaCOAST Church. What a relief!

“A simple invitation changed everything.”

As a young, bright eyed, but scared couple, we found a vibrant community of people who welcomed us into their lives. We joined a newlywed small group and began serving at Seacoast.

Because of Kat’s invitation, we found that although we were far from home, it didn’t have to feel that way.

Because of Kat’s invitation, our first priority when moving to any new duty station changed to finding a church that would make a new place feel like home.

Because of Kat’s invitation, we’re back in South Carolina, after several deployments, serving in full-time ministry at Seacoast.

A simple invitation changed everything.

How To Celebrate The Holidays With Your Kids After Divorce