When Robbie Madison accepted an invite to the Annex service for young adults back in 2002, he found Seacoast’s concept of worship a new experience. “I’d never seen worship played on a guitar before,” he said. “To be honest, I wasn’t sure what I thought of it initially. But then I really listened to the words and to the music. It was refreshing. Different. I ended up going to the Annex regularly.”

Now a long-time Seacoast worship leader, Robbie creates music to help bridge the gap between us and God. “At Seacoast, we specifically choose music that encourages intimacy with the Lord,” Robbie said, “to encourage you in your walk with him. Worshiping together is a communal experience where you can feel that spiritual element rising in the room, but it’s also individual, where the lyrics stay in your head after you go home and you can listen to those same songs and be reminded during the week of the love God has for you.”

Robbie grew up surrounded by music—his mother and stepfather both church music directors who also ran a gospel recording studio. His formal musical training began when he was six, and it wasn’t long before he was singing in the church choir that his mother led and learning to play various instruments. His stepfather taught him to sing pop gospel and by age eleven, Robbie was studying voice and trumpet at Charleston School of the Arts. A vocalist at heart, he had a breakthrough moment when his trumpet teacher told him to “play it like you’re singing it.” It made all the difference, and soon Robbie was first chair trumpet. 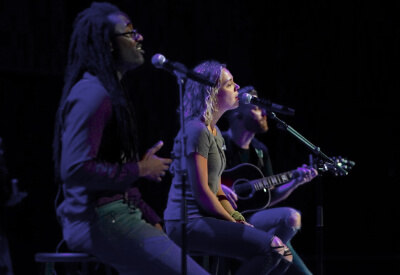 “I was a very shy kid though,” he said. “It was just part of my personality. Performing has always been my favorite part of the artistry, but ironically, the attention was hard for me. When I had trumpet performances, my hands and knees would shake. My mouth would go dry, my lips quiver. You could hear me shaking through the instrument. I would always pray, ‘God help me overcome this.’ Even now, God has to help me not let nerves taint the art and message. Every time I perform or produce, I ask him to fill me and inspire me.” Growing up, Robbie used every opportunity to practice and learn to control his nervousness, get it out beforehand. “I knew to get them out of my system. Shake? Shake now. Go through the process. Eat, use the restroom. But leading worship was easier because I could lose myself in the worship, in the moment, I felt validation from God that he’d given me gifts to use to further his Kingdom.”

“You could hear me shaking through the instrument. I would always pray, ‘God help me overcome this.”

And Robbie was courageous enough to use them. After receiving a Bachelor of Music Performance with a concentration in jazz and classical music, and a minor in Spanish at Newberry College, Robbie did mission work in Buenos Aires, Argentina for a campus ministry at the National University where many Argentinian presidents had gone to school. “I’d perform in jazz clubs there, too,” Robbie said. “Here, when you invite a 100 people, you might get 15. There, you invite 2, you get 50. Argentinians liked jazz and I was one of the only Black American artists in the music scene, so I think the combination drew them.”

When Robbie returned to the States in 2012, he visited Seacoast’s North Charleston Campus, just as they were developing a Spanish service and needed volunteers. Serving in Adopt-a-Block, going house to house to help the community in practical ways, he would pray for families in his fluent Spanish.

But Robbie made no mention of being musical. He was working on an album and worried that getting more involved would overshadow his project. But then the campus needed a worship leader. “Really, God?” Putting his trust in God’s timing, he gave in. Coming on staff, Robbie sang for both the Spanish* and English services and started building a worship team. Around that time, a friend at the campus, told him, “You’re really legit. We need to get you ‘wifed’ up. And I think I know who she is.” At an event soon afterward, his friend introduced him to Elizabeth and by the third week of her serving on the worship team, she was leading vocals. They have been leading together since 2013, transitioning to serve at the Irmo Campus and currently, James Island. And Elizabeth did, in fact, become his wife. They now have a young daughter and one on the way. 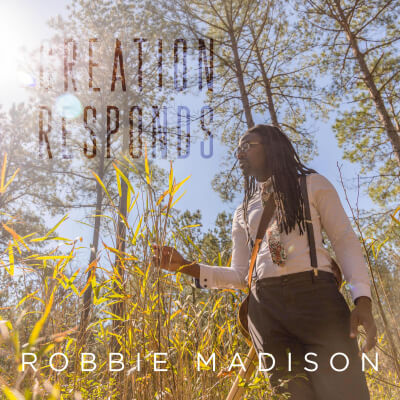 What about that album Robbie was working on when he joined the North Charleston worship team? It’s about to release! Creation Responds is a stylistically eclectic, full-length Christian album that includes jazz, gospel, contemporary, rock, and even orchestral music. “I’ve included songs that I wrote throughout my life and a few by friends who I wanted to showcase because they’re significant to me and I like to celebrate others’ gifts. It’s the first time I’m really sharing my own music. Something I created.”

At the release party on August 29, Robbie will discuss the recording process and the vision behind the songs. For example, after Robbie wrote the song, Psalm 23, his music producer made the suggestion, “Instead of only string players and piano, how about a symphony?” Next thing Robbie knew, the London Philharmonic was recording Psalm 23 during a session at Abbey Roads Studios. “It was crazy surreal,” he said, “to hear my music played by a world-renowned orchestra.”

When first listening to the harmonizing beauty of the symphony, the grand piano, the violins and the cello, Robbie said, “It was unfiltered and raw and I loved it. What I mean is you hear the slap of an instrument, the valves on a trumpet. You can hear the room. Often that gets taken out of the recording later on in the process, but I really like it. Micah Nichols, a fellow Seacoast musician likes to leave in the sound of a singer taking a breath, like in our Seacoast Worship song, Glory of Heaven. You can hear it, and that’s on purpose, bringing it more alive and real.”

Robbie believes God has put the right people along his path at the right time. As a worship leader and as part of Seacoast Music—the songwriting and recording arm of Seacoast Worship—he has found an encouraging team. “They really care about YOU, not just your marketability. In the past, I’ve had people want me to be somebody else. ‘Shake your hair more. Jump around more.’ In school, for my jazz and classical training, everything was critiqued, not validated. But Seacoast affirms and encourages you. That’s why I love being a part of a team committed to creating music that draws people into the presence of God, giving them hope. You never know how your art can minister to others.” Seacoast wants to help people explore and develop their art as well as their faith.

Creation Responds is an independent project that celebrates unity, how voices in worship can resonate together to bring down walls. Everyone is invited to the album release listening party, no RSVP needed. August 29 at 6:30 pm at Seacoast Church Mt. Pleasant Campus

*Note: Our Translation team now allow us all to experience the same service together. For more information, visit seacoast.org/translation or facebook.com/seacoasttranslation.