It’s not every day a church gives out envelopes of cash to its people, instructing them to bless others in whatever creative ways they would like. Keith and Deanie Hess, who were in attendance that Sunday during the reverse offering in late 2019 could not have guessed that within a year, the $5 they received would be helping provide monthly groceries to families living in Maracay, Venezuela.

The Hesses were in church at the Mount Pleasant Campus the Sunday, when everyone in attendance received an envelope of cash ranging from $3–10. “We were flabbergasted,” Keith said. “For a church to go to the expense of giving that out, without expecting any rebound, but trusting God to do the right thing, I could not believe it.” 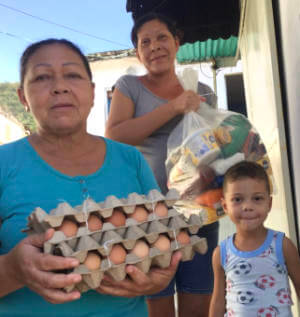 The couple received $5—and after one year—turned it into $1,028. The Hesses held onto the initial offering for a few months trying to decide how best to pass on the blessing. They prayed about how to multiply the small amount, and God gave Keith the idea to use his existing hobby of buying and selling musical items. Prayerfully, they decided to do this for a year, and see how much they had. Then they would determine how best to pass on the blessing.

Keith used the original $5 to buy a bag of new acoustic guitar bridge pins from a local pawn shop and then sold them online for $12. Then he used the profits to buy another bag of bridge pins, and repeated the process. Next up was buying and selling a piano pedal. Eventually he was able to purchase a $300 Ibanez electric bass guitar and sold it for $700.

At almost exactly the one-year mark, Deanie received a call from her friend, Maria, whom she had met while living in Venezuela as a child. They have kept in touch for 45 years. As Maria was describing the conditions of her country, and how people were struggling to survive with little food, the Hesses realized they had just found their charitable project, and the perfect person to help make it a reality. The Hesses also shared what they were doing with their small group, and everyone got excited about what could happen and donated to the cause. 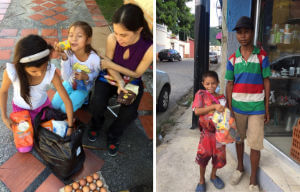 Together, the Hesses and Maria formed a plan to use the reverse offering fund to buy food, not just for Maria, but for families living in even worse situations. A mother living with a brain tumor, a single dad with a daughter who has Down syndrome, a widow caring for her two small children, and two boys who lost their fathers now have one less basic need to worry about.

Government price-controlled grocery stores have made the ability to buy food nearly unreachable, both costly and scarce. Thousands across the country stand in line outside stores in hopes of returning home with enough food and supplies for their families. With funds from the Hesses’ project, Maria can purchase enough groceries at privately-owned stores with $40 to feed a family for a month, including items like sardines, cheese, eggs, and cornmeal. Maria currently delivers these packages of food to five families. Although Maria was a former business owner and earned a sufficient salary, her retirement pension now provides only $.70 a month. She would have to save for four years to afford one of these packages of food.

The Hesses continue to fund the project with the reverse offering they multiplied. “The older I get, the less stuff means to me,” Keith said. “We are truly blessed with the people around us, and it’s really joyful to be able to share something with someone who is not nearly as fortunate as we are.”

Relationships Can Be Hard, But This One’s Different