A health crisis can hit when we least expect it. This was the case for Doug Ridgeway, a 55-year-old retired police officer who has been attending and serving in Seacoast’s Manning campus for over 10 years. On July 19, just before 1:00 pm, when Doug was working in the mold shop at the Continental Tire plant, he had a strange feeling in his head. He was having a stroke.

Surprisingly, although he knew something was wrong, he didn’t realize he was the one with the problem. He thought someone beside him was having the stroke, and he was watching this other person. He kept repeating, “My buddy is in trouble.”

Because he was at work, he got the help he needed immediately. A nurse was on-site, and she gave him a stroke test. She said he received the highest stroke score she had ever given. At this point, he couldn’t move the right side of his body, and he couldn’t talk. The nurse called an ambulance. An emergency helicopter landed at the front of the plant and flew him to a hospital in Columbia.

All In The Timing 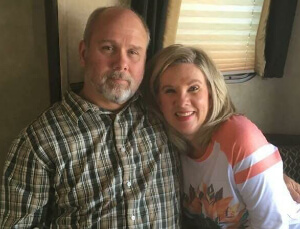 When he got to the hospital, the staff administered tPA (tissue plasminogen activator), which had to be given no more than four and a half hours from when the stroke started and couldn’t have been given at all if the time of the stroke had been unknown. It dissolved the clot and improved the blood flow to the part of the brain being deprived. By the time his family got to the hospital in Columbia, he was able to move and talk again.

He gave his wife a thumbs up when he saw her and said, “I’m going to be OK.”

The staff in the ICU unit marveled at Doug’s quick recovery and called him a walking miracle. An ultrasound showed that his left carotid artery was completely blocked, but other arteries in the area had grown and compensated for the blockage. Within six days, he was out of the hospital. In less than a month, he was back at work, but he felt well enough to go back sooner. The only issue he had was in learning to write his name again, but he totally recovered that ability.

Today, Doug can’t help but get a little emotional when he talks about his stroke. He says he can see God in every detail of that day, starting with how he was at work because he originally wasn’t scheduled to be. Also, he was where other people could see him when it started and working when the nurse was on site. If any of these things had been different, he might not have gotten the quick treatment he needed. Plus, he is amazed at how perfectly the other arteries have grown to compensate for the blockage and how he has been able to go back to life as normal.

Seacoast Manning Campus Pastor Jim Fleming says the experience has made a big impact on Doug, a man who was already a faithful servant of God. He says, “God performs miracles like this so he can be glorified. I have seen Doug become closer to God because of what happened.”

Doug agrees, “You can’t go through something like that without it affecting you. I know who got me through this.”