Beat of Her Own Drum

In 1953, three-year-old Sue Stevens heard the parade’s booming drums coming closer. “I lived for them until they got there and died after they left,” Sue said. “I knew that was the thing I had to do.” Yet for Sue, growing up in a Catholic coal mining and steel mill-working family in rural Pennsylvania, becoming a drummer didn’t seem an option.

But at age fourteen, she got her chance. The local drum and bugle corps offered local kids an opportunity to learn instruments and to be a part of the town parades. Sue absorbed all she could during her drumming and piano lessons, finding music a reprieve from her rough childhood.

In 1977, Sue joined the Army and began her career at wheeled-mechanics school. Later at Fort Hood, TX, she met her future husband, who was also a soldier. There, Sue auditioned for the Army Band, never losing her desire to play music. When she was accepted as a drummer, her long-held dream became a reality. The Army sent her to music school. 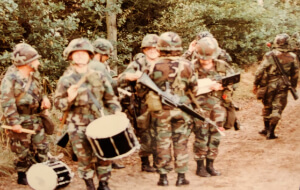 After completing music school, she and her husband received orders for Frankfurt, Germany, where they spent the first years of their marriage blissfully taking in the German countryside and enjoying each other’s company. But when they had to return to the States, their relationship was severely challenged.

Acclimating back to life in the States was hard. There were a multitude of distractions that added to their feeling of disconnection individually and as a couple. As they grew apart, Sue felt depression descend over her. “I felt like a failure,” she said. “Victim. Hopeless. Unlovable. Unlikeable even.” Sue turned inward, desperate to cover up what was happening at home, which led her to feel even more isolated and alone.

While driving to work one morning, coming to a stop sign, Sue had a pivotal moment. She found herself sitting there a few minutes and asking God to help her, though she lacked a relationship with him. “Without words. Just my thoughts. I am reaching up…to touch the bottom. I can do no more.”

She was exhausted from trying to carry the weight of her failing marriage along with problems from her childhood. Then she heard on the radio, “Come to me, all you who are weary and burdened, and I will give you rest,” from Matthew 11:28. She craved this rest that Jesus offered.

Come to me, all you who are weary and burdened, and I will give you rest.  Matthew 11:28

Not long afterward, she and her husband decided to try counseling with their unit chaplain. During a counseling session, Sue heard for the first time that Jesus loved her. She and her husband began regularly attending church and small group together, and their marriage improved. They welcomed their son, Devon into the world, and their life found its cadence again. But within eighteen months that changed.

Sue received orders for Germany again while her husband deployed to Afghanistan. The plan was for him to rejoin the family in Germany after his two-year deployment—except that never happened. Instead, he decided he didn’t want to be married anymore.

Not Afraid To Die

“My prayers,” Sue said, “were for the strength I needed to get through each day. The first time when our marriage wasn’t good, I had no prayers.” This time around, Sue had a relationship with God, and he helped her get through the divorce and find her identity and worth in Christ rather than in another person.

For some time, Sue remained in Germany. After serving in the military for twenty-two years, she eventually retired as a First Sergeant in the 282nd Army Band at Fort Jackson, SC. Although retired, she wasn’t finished playing music. She began offering drum, piano, guitar, and bass lessons to students. She played drums at a local church and in a community band. But just as her life took on a new satisfying rhythm and beat, she got a call from her doctor. The diagnosis was breast cancer—the same kind that prematurely claimed the lives of her two aunts. The all-too-familiar feeling of defeat came welling up. 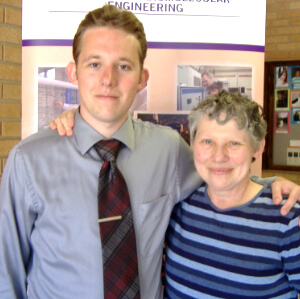 Devon was committed to helping his mom fight this battle, but he had recently claimed atheism and wanted nothing to do with God or to hear anything about him.

Finding Light In The Shadows

Sue’s surgeon happened to be a Christian. Devon’s presence at Sue’s appointment appeared to be a way for God to reach him again. After looking at her file, her surgeon said, “I’m not sure if you’re Christian or not, but I’d like to tell you that you may feel like you’re walking through the valley of the shadow of death, but what do you need to have a shadow? You need light. Let it be known, there is always light.”

“I wondered in death if I could still say one more thing through music to give them the hope and peace that I have found.” – Sue Stevens

Those words stayed with her, even after a double mastectomy and chemo treatments. Sue found “light” in her faith and in playing music for an audience of One. She continued to battle, but she also kept preparing. “I even picked out the music to play at my funeral…I still had friends and family going through similar struggles, and I wondered in death if I could still say one more thing through music to give them the hope and peace that I have found.”

Whenever she felt strong enough after completing chemo treatments, she continued to offer lessons to her students. If she made it through cancer, teaching was what she wanted to do for the rest of her life. It gave her hope in a dark time and helped her prepare to live.

A couple years into Sue’s battle with cancer, Devon returned to church, which Sue attributed to the seeds planted that day with the surgeon. “My struggles are not for me alone,” she said. “It influences everyone in my field of gravity.”

In 2016, Sue was declared cancer-free. And that same year, she started attending the Seacoast Church Columbia Campus. 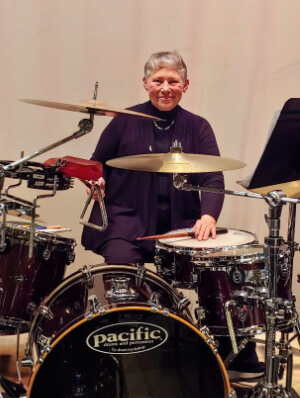 Eventually, Sue auditioned for the worship team, although Seacoast’s music was very different than the style she had learned to play. “In a normal audition, that would have ended things,” she said. “But this wasn’t a normal audition. This was Seacoast. There was care and feeding and encouragement for any potential I had by worship leader, Brianna McLeod, Campus Pastor Matt Benton, and lead drummer Kelvyn Woods.”

Sue—a music teacher with 30 students—was not afraid to become a student, herself, to use her gifts to bless others and help point them toward God. She has since joined the worship team. “If ever a team showed God’s grace this was the team,” Sue said. “They all encouraged me to keep on.”

Music has brought Sue through her toughest trials and led her to know Jesus. As a young girl hearing those drumbeats for the first time, Sue never could have imagined God would use this passion to serve, encourage, and help shape so many people. Still playing music with local big bands and filling in when needed at Seacoast, Sue is the embodiment of what it looks like to march to the beat of her own drum, with God the ultimate music director of her life.

Sing to him a new song, play skillfully and shout with joy. For the word of the Lord is right and true; he is faithful in all he does. ~Psalm 33:3-4 (NIV)

Not Really an Empath