Charleston, South Carolina has experienced significant trials in the last several years. Horrors such as the 2015 shooting at Mother Emanuel AME Church threatened to deepen divides and envelop the city in hate and fear. But instead, we’ve seen incredible examples of love and forgiveness thwart those attempts to separate us.

“So in everything, do to others what you would have them do to you, for this sums up the Law and the Prophets,” Matthew 7:12 (NIV).

We are all God’s children, and we need to recognize each other as such. During our series, Where’s the Love?, we want to look at the things that tend to divide us, and explore how we can respond to the lack of love, to rebuild hope and trust. Interestingly, the word “trust” can also mean to “bind together” in Hebrew. Together, we can build relationships and trust in our communities. Together, we can be the love that has been missing.

As a church, we’re honored to be a part of a citywide movement to align people of different backgrounds, faiths, races, and ideologies under a banner of understanding, tolerance, peace, and love.

All organizations have a tendency to think and operate in silos. Religious organizations are no exception. We think about the potential growth and impact of our individual programs and ministries, but we often neglect to consider other perspectives and how much positive change could occur if we worked together.

“We’re honored to be a part of a citywide movement to align people of different backgrounds, faiths, races, and ideologies under a banner of peace, understanding, and tolerance.”

In an effort to help spur that positive change, Seacoast West Ashley hosted a police appreciation prayer service during National Police Week. It was an honor to witness different groups, organizations, and churches come together to thank and appreciate local law enforcement for the role they play in our city and to better promote reconciliation and cross-cultural awareness. 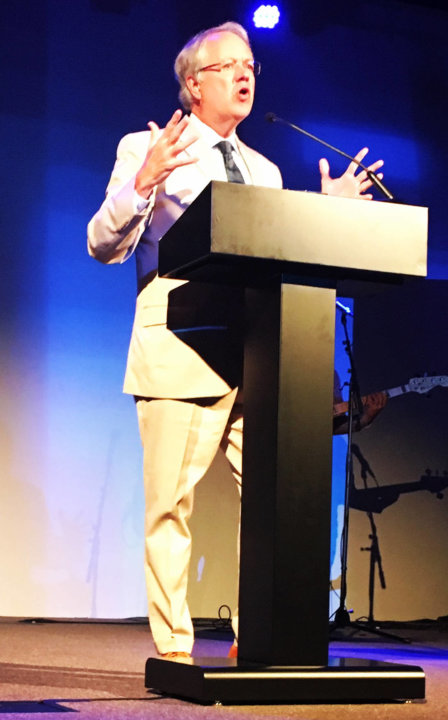 Charleston Mayor, John Tecklenburg, along with several community leaders met at the West Ashley Campus to discuss unity in the city.

We were honored to have a wide variety of local officials and community members attend, including Charleston’s mayor, John Tecklenburg; Charleston’s new chief of police, Luther Reynolds; and members of the Mayor’s Clergy Council that consists of over 77 leaders across different faiths and denominations.

Speakers included Dave Echols, the vice president and general manager of the Charleston Riverdogs; Rich Robinson of the Coastal Crisis Chaplaincy; Reverend John Paul Brown of the Illumination Project that was developed to promote public safety and individual rights; and Rabbi Adam Rosenbaum of Synagogue Emanu-El, who delivered a prayer of gratitude for the service of local law enforcement.

Hosting such different organizations all under the same roof helps remind us that none of us are in this alone. We can begin to see ourselves as contributing members of a greater movement with a mission to bring peace and harmony where there has previously been division and discord. We are thankful for our elected officials, law enforcement, the faith community, and for a body of believers committed to making Charleston live up to its name as the Holy City.

“We can begin to see ourselves as contributing members of a greater movement with a mission to bring peace and harmony where there has previously been division and discord.”

How about you? Will you join us in praying that God unites us in ways that transcend our differences and fulfills his will?

The Missing Piece to Changing Hearts