The day before Thanksgiving in 2018, Michael Crosett woke up feeling nauseous. When the uneasy feeling continued for several days, he visited his doctor. After multiple rounds of scans and blood work, Michael was called in to hear the good news, and the bad news. The bad news – a mass on his intestine, diagnosed as Burkitt’s lymphoma, a rare, and highly aggressive cancer. The good news – it’s treatable, but it required Michael to live at the hospital for five days, returning every 21 days, to receive a total of six rounds of chemotherapy treatments.

“When you hear the word cancer it’s absolutely devastating, it has a stigma. You hear more of the horror stories, than of success,” Michael said.

Already feeling so many emotions upon hearing the diagnosis, he then was told he had to receive treatments at the Medical University South Carolina (MUSC), a provider not in his insurance network. “My mind immediately went to the financial burden,” Michael said, but his doctor shifted his mindset by saying, “you’re thinking about the wrong things, you need to think about living.” That’s what Michael did. As the bills started coming in, he focused on the blessings.

“Had it not been for the church, faith, family, and friends, I wouldn’t be here today.”

Michael and his wife of 35 years, Linda, found the blessings through people. The couple has been attending the Seacoast Church Mount Pleasant Campus for twelve years and serving in Kidscoast for ten of those years. While serving a few days after his diagnosis, he told members of the Kidscoast Team about his health. They immediately prayed for him, and remained a constant source of motivation, and encouragement throughout his journey, reminding him regularly, “you’ve got this.” Even before he started treatments, he already had a community in his corner.

“Had it not been for the church, faith, family, and friends, I wouldn’t be here today,” Michael said. 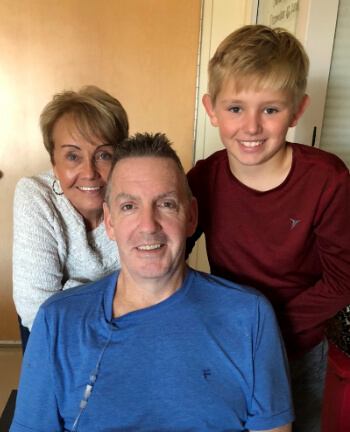 While in the hospital on the first day of chemotherapy, his nurse, whom he compared to “an angel,” because of her encouraging words, outlined the “3-Fs.” She explained, “Faith, Family and Friends – believe that God is not done with you and he has bigger plans for your future. As a survivor, cancer will end up being a blessing in disguise. You will find opportunities to share your story with others and encourage others to continue to fight. Your family will provide you with all the love and support you can handle, and your friends will be there to coach you and provide you with laughter and plans for the future.”

After his second chemo treatment, Michael did have hope for the future. While driving his grandson to play basketball, he received a phone call. “The cancer is gone,” his doctor told him. All scans showed the cancer had left his body, but because it was originally detected in his lymph nodes, out of precaution, the medical team still wanted Michael to complete the original plan – an additional four weeks of chemo.

At the time of the call, he was driving by the Mount Pleasant Campus, a place he had attended for years, but, “it was the first time I noticed the cross on top of the church,” Michael said. Seeing the cross at that moment assured Michael that God had healed him, and that he would take care of him throughout the remaining grueling chemotherapy treatments.

Back in the hospital, he spent Wednesday through Sunday hooked to an IV containing bags of chemo. The IV pole became a necessary companion. When he mustered the strength to walk, it rolled alongside him. It was there when he made his way down to the hospital sunroom to read, a routine he kept as often as he could – a strong recommendation from his nurse, who warned, “don’t let me catch you in bed in the afternoon having a pity party.” The pole was even there when his longtime hair stylist visited the hospital to shave his full head of hair, preventing the emotional toll of having it fall out on its own. After his five-day regimen, he could leave the pole behind, and go home, only to return 21 days later for his next dose.

“Now, I know God chose me to take this experience to help others.”

His wife, Linda, was a constant pillar of support at home and in the hospital. “Her encouragement was unbelievable,” Michael said. Since he was first diagnosed, Linda helped Michael prepare mentally, and years prior, she was the one who convinced him to go to church, helping solidify the faith he was standing on now. “She would not let me have a defeatist attitude.”

Following one of his last treatments, Linda came home to find him looking as “white as a ghost.” Receiving doctor’s orders, she got him in the car, and on the way to MUSC, Michael began hallucinating, and feeling faint. A blood transfusion saved his life.

He lived to complete his final treatment, surrounded by his family, friends, and hospital staff while he “rang the bell,” a tradition of celebration in hospitals following the final cancer treatment. “It was the most emotional and gratifying day of my life. I never thought I’d get through the end of the tunnel,” Michael said.

Remembering the words his nurse had said on the first day of treatment about opportunities to tell his story, Michael now uses his experience to encourage others who are facing cancer. “Cancer patients often wonder, ‘Why me?,’ Now, I know God chose me to take this experience to help others,” Michael said.

Knowing the positive impact that encouraging words from others had on his life, he now uses his own words in a letter he sends to anyone he hears about who has received a cancer diagnosis. Within the letter, he includes the words of his nurse, and his own thoughts, “stay positive, remain focused, do what the doctors tell you, and know that this is nothing more than a slight detour in your life. God is looking over you and he is going to see how you one day share your story with others.”

Michael celebrated three years of being cancer free on April 1, 2022. “Not a night goes by, that I don’t lay my head on my pillow without a wooden cross in my hands,” Michael said. A gift from a friend, the cross is a daily reminder that “God placed his healing hands upon my body and allowed me another day with my family and friends.”