Dare To Love In The Face Of Fear

The sweltering heat hit Brian Lewis, Men’s Ministry Pastor, and the missions team as soon as they stepped from the van onto a street in El Chivirito: a slum in Honduras controlled by the notorious gang, MS-13. The air smelled of rotting fruit and grease, and held the vinegary sting of things best left unanalyzed. Brian watched a man with a carcass of meat on his shoulder move from stall to stall in the nearby open-air market, selling pieces to vendors. The streets felt hemmed in, too close with buildings, makeshift stands, and people sleeping on the sidewalk. Were they safe? What had he gotten them into?

But David, another member of the team, saw something different. Across the street, in front of the small church and community center, stood a little girl—there to greet them. On his previous mission trip to El Chivirito two years ago, there were no children in the church—only people volatile with addictions who needed a place to stay. Now families came to church here and Pastor Dany Dyer, who ran the local ministry Casa de Oracion Familiar (Family House of Prayer), said those addicts were clean. This was progress! Smiling, David and the team followed the girl and the pastor inside.

The gang, MS-13, was well aware of the mission team’s presence. Without their permission, no one would’ve stepped foot in El Chivirito. Within the slum, the church and community center served as a safe place for kids to receive a meal and tutoring before and after school, to learn the Bible and to pray, and to just be kids—playing games, like dominos.

“Only the Lord can change the hearts of such men, to the degree that they allow us to minister in territories they control.” – David Wheeler

Pastor Dany had worked with Casa de Oracion Familiar for the past seven years, and within the last two, Seacoast had begun giving directly to the project—the relationship born from Dr. Mike Sabback’s 26-years of medical missions to Honduras, ten in conjunction with Seacoast.

As Brian met the people of the church, he started to relax and was soon joining in the lively worship led by a nine-year-old singing enthusiastically to a well-worn recording. After the local pastor’s message, Brian spoke to the crowd and then along with the team, helped distribute rice, beans, and meat to those at the church and in the streets. “It felt like feeding the 5,000,” he said.

Ryan, another team member, was impacted most by the children. “I loved how filled with joy the kids were. They could make a toy out of anything—even an empty roll of masking tape.”

“It meant a lot to me,” David said, “to hear Brian be so vulnerable, admitting to us how uncomfortable he felt. He’s our men’s pastor and he’s so real and open. I respect that. And it was so encouraging to see where he went after that.”

In the following days, the team would visit two prisons—including a maximum security prison where the guards wore balaclavas to cover their faces in order not to suffer retribution from the gangs. “Brian was leading and walking it out,” David said. “That hit me hard.” 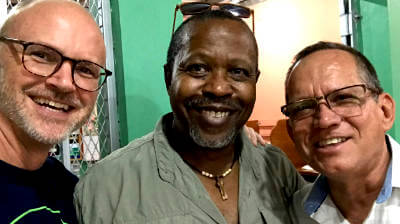 Dwight (right), and his wife Elizabeth run Los Pinos Children’s Cup CarePoint Facility, where they show the love of Christ and provide hope to children through a partnership with the local church. Also pictured, Brad (left) and Brian. Photo courtesy of David Andrew Wheeler.

Brian wasn’t the only one on the team facing underlying fears. Brad was very anxious about going into the prisons and giving his testimony. For two days prior, he felt sick, intimidated. Passing through multiple levels of security upon entering the prison, through metal detectors and gated and fenced off areas, didn’t help. The guards toted machine guns and patted down Pastor Dany and each team member before flipping through every page of the Bibles they brought. Eventually the guards led the team deeper into the compound to a building that held four large cell blocks, each secured separately. The guards did not accompany the team into the cell block. Instead they entered alone and the sliding metal door clanged shut behind them.

Each cell block was divided according to gang and held over 175 men. Brad noticed most of the men were shirtless and barefoot, with tattoos covering their bodies and some, even their faces. They sat at the concrete picnic tables on the main floor, on the stairs, and on the upper levels with their arms and legs hanging through the bars. Some of the men ignored the team, but many watched them with interest.

“God loves them as much as he loves me. I heard him say, ‘These are my children.’ And I was going to respect them as such. How dare I do anything less.” – Brian Lewis, Seacoast Men’s Ministry Pastor

Every week, Pastor Dany visited the prison, and his commitment was paying off. Angelo, a former enforcer for MS-13, now served in full-time ministry with Dany. After getting out of prison, Angelo returned every day to pray for the men inside. Angelo’s faith and witness led to the #2 leader of MS-13 dropping to his knees and accepting Christ. In turn, that man’s new declaration of faith created a more welcoming atmosphere in the cell block that allowed the men to explore Christianity more freely. “Only the Lord can change the hearts of such men,” David said, “to the degree that they allow us to minister in territories they control.”

First, the team talked to the men who spoke English so they could translate to others. “Pastor Dany spent a long time mingling before starting worship,” Brian said. “I’m not especially good at abiding. I’m an impatient American. But I realized that abiding is important in their culture. And it gave the guys time to ask questions and share stories.” 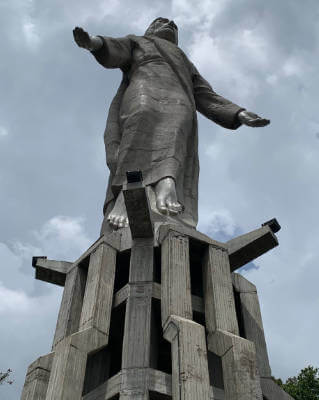 Photo courtesy of David Andrew Wheeler.  The Christ “El Picacho” monument stands on the hill El Picacho in Tegucigalpa, the capital of Honduras.

When Pastor Dany explained that the team had traveled over a thousand miles to see them, Brian could tell it had an impact. “These men were starved for someone to care about them,” Brian said. “They get to see family one hour a week, but over half of them have no visitors. Nobody comes to see them. Our presence reminded them God is real and cares about them. He hasn’t forgotten or given up on them.”

Many men came forward for prayer even without understanding the words. The feeling of God reaching out to them was palpable, and Brian felt their tears on his neck, the weight of their sadness pressing on him as he prayed for them.

Seeing men come to Jesus that day and at the other prison where his team gave their testimonies, Brian felt not only deeply moved, but convicted. “God loves them as much as he loves me. I heard him say, ‘These are my children.’ And I was going to respect them as such. How dare I do anything less. When we returned to the church and the community center later, I no longer kept my head down. I talked to people on the street. I saw them differently. It changed my whole perspective.”

Brian: “When you take a step into what God has for you, he helps you in ways you can’t imagine.”

Ryan: “The way the kids greeted us, with such joy, at the community center. It’s something I’ll always remember.”

David: “It’s great to go back to Honduras and see the results and progress. So many families are impacted and the church is growing. The legacy of a nation starts with the family.”

Brad: “I’ve learned you need to let God control the message. Trust in him. Let the Holy Spirit work. Anybody could go on this trip. When we got back, we spoke at a men’s lunchtime group and they asked, ‘Weren’t you afraid?’ I answered, ‘I used to be. But not anymore. I’m definitely going back.’”