Delivered In A Box Truck

What’s the best thing since sliced bread? Mail order! You can literally get anything delivered right to your door. From socks to kumquats, anything can be delivered in a box truck. For Christine, from Seacoast Church’s Asheville Campus—anything—even included Jesus.

Christine was used to her family moving every few years since her father was in the Air Force. But when she was six years old, the Vietnam War broke out and her father was deployed. She moved with her mother and two siblings to France to be near her grandparents, where for several years, she attended a Catholic school.

After the war, her father, like many service men and women, was not the same. Suffering from extreme PTSD, he self-medicated with alcohol and became violent with Christine. Christine’s brother left home and joined the Air Force while her sister got married. Christine remained with her parents while they sought comfort in extramarital affairs. Brokenness wove itself into the fabric of her family, and despite learning who God was in school, Christine felt abandoned and found zero comfort in religion.

Christine experimented with various coping mechanisms in middle and high school, grasping for anything and anyone who could make her feel joy and peace. But most often, she just felt numb. 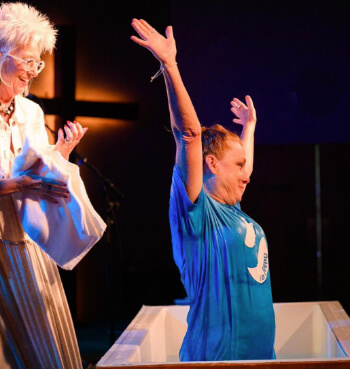 Christine was baptized in the summer of 2022, celebrating her faith in Jesus, and finally finding the peace and joy she’d been looking for.

After high school, Christine joined the Air National Guard and attended college to pursue a degree in health and science education. It was there that she met her first husband, who already had two daughters. An instant family.

Eventually, the combination of stress from college, step-motherhood, and finding herself in a controlling marriage, led to multiple nervous breakdowns and medical interventions. At the suggestion of her two stepdaughters, Christine got ‘saved’ at the age of 33. Although desperate to see change, she remembers this experience as nothing special and quite benign.

When after 15 difficult years of marriage, she divorced her husband, her church told her she could no longer be a member. So, she threw her Bible in the trash and moved to Florida to be near her aging parents.

A Newfound World of Worship

There, she taught school for 15 years while her mother battled Alzheimer’s disease. When her mother passed, Christine moved to Asheville, NC, a once-favorite vacation spot. A friend she met there suggested Christine see a shaman, or energy healer, to help deal with her unresolved trauma. She decided to give it a try.

She threw herself entirely into this newfound world of pagan worship and healing.

After a few sessions, Christine began to feel calmer and closer to grasping that peace she craved, but she found it odd that she was not encouraged to talk about her pain or childhood. Instead, these sessions involved her sitting or lying quietly while the shaman chanted and “removed negative energy from her body.” Feeling like she was making progress, she threw herself entirely into this newfound world of pagan worship and healing.

She decided to study shamanism herself. But the deeper she went, the more conflicted she felt. Many of the practices involved idolatry, communication with the dead, and multiple gods. These concepts did not sit well with her Catholic upbringing or current Christian understanding. In shamanism, God was not “the power,” but just one of many.

Still, she continued her shaman studies and practices, trying to make it coincide with what she knew about God. She didn’t want to risk losing the feeling of calm that she had been so desperate to find.

In 2021, Christine remembers eagerly awaiting a delivery from FedEx. Hearing the music getting louder and louder, she went outside as the FedEx truck stopped in front of her house. The driver was singing along to a Frank Sinatra song while digging through a mountain of packages. Christine asked the driver what made her so joyful despite her workday. She immediately said “Jesus.”

She realized that Jesus had been saving and sustaining her for years, but she was calling him by the wrong name.

Christine smiled and told the driver about the joy she found in shamanism. After rambling on about rocks, fires, and sacred trees, she noticed the driver looking at her with a puzzled face. The driver simply said, “Okay, but where’s Jesus?”

In that moment, Christine felt a fog fade, a veil lift, a heart soften. She realized that Jesus had been saving and sustaining her for years, but she was calling him by the wrong name.

She immediately thanked the driver, went inside, and called her friend, Becky, who attended Seacoast Church. Christine told her friend she needed to be at the next available church service.

Leaning On The Rock

Over the following weeks, Christine felt Jesus working in her, especially during worship. She felt his presence surround her, felt him calling her out of the pagan world she had embraced. Over time, she traded in her healing rocks for a new Bible, learning to lean on the true rock of Jesus Christ.

In the summer of 2022, Christine was baptized by her dear friend, Becky during a church service. Christine says she is overjoyed to finally be embracing her faith and a true relationship with Jesus Christ. She feels constantly surrounded by him and finally has the peace and calm she has been searching for her entire life. She cannot thank her FedEx driver enough for delivering the best package ever—Jesus.