For 11 years, Sandra Connell has faithfully led the same girls’ small group at Seacoast Church. She has been with the girls since they were in 2nd grade and now her group of 40 has just graduated high school.

Sandra knows they will soon go their separate ways and she’ll miss them. “But they will always be my girls,” she said, “and I will do my best to stay in their lives.”

In 2002, Sandra read The Purpose Driven Life as part of a Seacoast-wide study, and her eyes were opened to the need for serving in the church and in the community. Sandra prayed, and felt God leading her to children’s ministry. In obedience, she started serving in the Kidscoast 4-year-old classroom, even though she found God’s choice interesting since she did not have children. Not long afterward, she landed in the 2nd grade room, where she met her girls.

“I gave it to God,” she said. “If he wants me to be in their life, He’s going to make everything work out. When you trust Him that much, and he comes through every time, it’s almost unbelievable.”

Christmas parties were among the many special moments the group spent together. (9th grade)

Kidscoast had started encouraging small group leaders to move up with the kids as they transitioned grades to create a sense of safety and familiarity. That was the start of them having Ms. Sandra for 3rd grade, and every subsequent year. “There was something about that group of girls, that made me want to keep saying yes.”

Despite efforts to keep the group small, adding leaders and dividing the group, all 40 girls found their way back to Ms. Sandra. Many made a plea to their parents to attend the 10:00 am service so they could be in her group. They met every Sunday during Kidscoast, and later, Custom.

Sandra remained a constant for them each week. “If it meant that much to them that it was the same person, and if it would keep them coming to church, I was going to be that person,” Sandra said.

As the girls grew up and experienced heartache due to parent’s divorce, broken friendships, and the death of loved ones, Sandra walked alongside them. At times, parents reached out to Sandra asking her to help guide their daughters during times of pain. She started with the Bible. “We’re going to point to God’s Word and see what He says first,” she told them. “His advice is in the Bible and we’re going to go through it together.”

This helped many of the girls let go of fear and find strength. “They came in with such hurt, and left with faith,” Sandra said. “I’m not perfect either, but I was able to talk with them because I’d been there.”

“I gave it to God, if he wants me to be in their life, He’s going to make everything work out.” – Sandra Connell

Yet there were weeks when Sandra doubted the girls needed her anymore. In those times, she reminded herself what Jon Hohm, Pastor of NextGen, said “All you need to do is show up.” So, she showed. Then, “it would be the best worship, or message, and I would always be reminded of why I’m there,” Sandra said. “I wasn’t the best leader, or the most experienced, but it was the imperfect times that bonded us together the most.”

The girls served together in Kidscoast, and at the annual Luke 14/Night to Shine Prom, as manicurists for guests with special needs. Ministries often asked Sandra “are your girls available to help?” They had earned a reputation for serving.

“They absolutely have a heart for Jesus and want to do the right thing,” Sandra said. “They are so smart, it’s incredible that we came together.”

Over the years, Sandra joined the girls for six Custom Summer Camps. “I think I was the oldest one at camp,” she said with a laugh. Camp was an opportunity to get away with no distractions and help them focus on building their relationship with God and with each other. With every camp, the girls became closer friends, realizing their group was special because someone always has their backs. 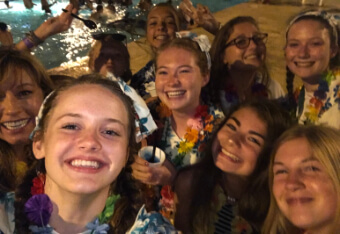 Sandra will cherish many Summer Camp memories from her six years of attendance. (2018)

Keeping up with the girls for a week at camp left Sandra exhausted. But the moms were always so thankful that she accompanied the girls and sent pictures, showing them safe and happy. “The moms were so important, dropping them off at every One Night, camp, church, making sure the girls were there,” Sandra said.

Many of the girls, in 6th grade, made the decision to accept Christ and asked Sandra to be a part of their baptism in the ocean.

“I won’t stop chasing them for God,” Sandra said. “I know there were times I fell away, but at some point you realize you need to go back. I want them to have an easy way back to God.”

For their graduation, Sandra purchased 40 devotionals and honored the girls and their moms at a celebration luncheon. “The girls still want me to be a part of their life. I feel grateful and humbled. I didn’t want it to end. I knew we had something special, it wasn’t perfect, but it was special.”

Memorial Day: A Time To Reflect On Sacrifice