Father’s Day: The Other Side of Things

A single dad inspired the creation of Father’s Day. In 1909, Sonora Smart Dodd sat in church, wondering: if mothers had a day to honor them, why not fathers? Her father, William Jackson Smart, a Civil War veteran, was selfless and devoted—even with 14 children. Thanks to Sonora’s dogged efforts, Father’s Day eventually became a national holiday.

So we’d like to give a special nod to you single dads out there as we honor all fathers. Happy Father’s Day. We see you and wanted to share a couple of your stories.

The righteous who walks in his integrity—blessed are his children after him! Proverbs 20:7 (ESV)

Not long after the birth of his only son, Brennan found himself going through a divorce. “It was incredibly painful. It wasn’t what I wanted,” Brennan said, “But turning to God and becoming more involved at Seacoast helped me get through it.” 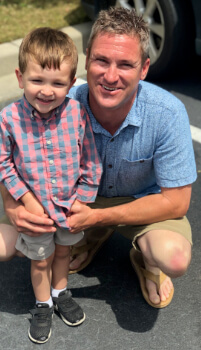 Brennan has found encouragement and support in the men’s ministry, regularly attending the men’s Tuesday lunches and taking the men’s Battles to Breakthroughs course three times. This past fall he went on the men’s hike. “It’s all been an amazing experience. And now I have the best friends of my life. I’m finally coming out on the other side of things.”

Recently Brennan’s ex-wife joined him and Finn, their three-year-old son, at a missions dinner before the First Wednesday service. “It’s taken a lot of time,” Brennan said, “but we’ve become friends—better even than in the good days of our marriage.” Both he and his ex-wife live close to Seacoast, pretty much sandwiching the church between their homes. Brennan sees Finn every other day.

Brennan and Finn pray together every night, and whenever they’re riding in the truck, Finn asks, “Daddy can we listen to Jesus music?” Windows down in the Silverado, Finn raises his hands, as if to touch the clouds, calling out, “Hi God.”

“It was a heartbreaking path to take,” Brennan said, “But I’d tell other single dads, don’t give up hope. Sometimes you’ll feel hurt and lonely, but there’ll come a day when you’re on the other side of this. And it might just be better than anything you could’ve expected.”

Matt moved from California to South Carolina on Thanksgiving Day 2016. “I’d been a drug addict and a criminal, in and out of prison for years. During that time, my mother adopted my two sons, uncertain of my future. My boys are now 13 and 12.”

While serving his second prison term, Matt thought often of how there had to be more to life since he was even still alive. There had to be a God. And he was determined to find him. Matt began reading the Bible and praying in prison. And it changed him.

After being released, Matt moved to South Carolina to be near his mother and sons. Once there, he found Seacoast. “It’s coming up on three years now. I’ve pulled out of my old life. Seacoast is such a stellar place. I’m not a church guy, but I can’t deny what I get from there. And I’ve become a leader on the men’s hike, going five times. I’ve made so many brothers and have unbelievable support from a great group of guys.” 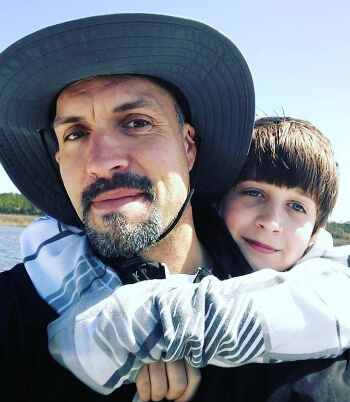 Now Matt has a good job and bought a house in the same development as his mom, so he sees his boys all the time. He works for a local carpet cleaning company whose owners both go to Seacoast. It happened that Matt had known the brother of one of the owners while in prison in California, and he’d followed advice to contact him in South Carolina if he needed a job.

“Pain is the great instructor,” Matt said. “Until it gets too bad, we won’t fix or change anything. But if we want to change, we have to walk through it to get to the other side. I hope my kids don’t have to learn any of the hard lessons I did.”

Matt is looking forward to renting a lake house on Lake Murray soon to spend some unplugged time with his family—and his dog, Blue, a beagle/hound mix rescue. “It’s good to get the boys away from their electronics. In a generation of devices, we need to pull them away from the noise, violence, and color on the screen. I want to show them what a good man looks like, acts like. I want to be a good example to them of a father. Through Seacoast, God has rebuilt my confidence and has helped me become somebody different.”

Not Just A Number