In 2018, Travis Graham felt like his life was in shambles. During his years of military and police service, he had injured his back multiple times. As a result, he was diagnosed with spinal stenosis, bulging disc, degenerative disc disease, and degenerative arthritis. He couldn’t walk without pain and ended up fighting an addiction to pain pills and alcohol. In addition, he was dealing with PTSD from trauma he had experienced on duty as a police officer, and struggling with pornography addiction.

Trying to get his life together, he signed up for the Seacoast Greenville men’s hike. He looked forward to preparing for the trip because he wanted to prove he could make the hike despite his physical challenges. Plus, he was wrestling with his faith and wanted to know who God really was.

Finding God on the Mountain 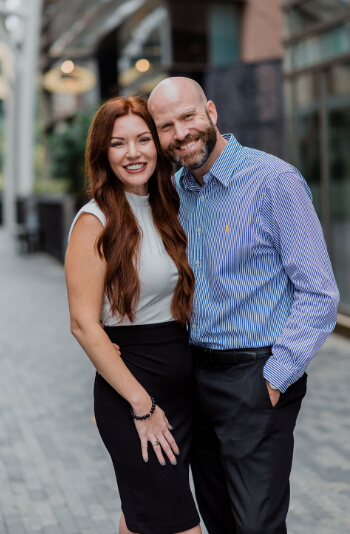 Travis said, “I learned the love of Jesus on that trip. I realized that if I were the only person on the earth, Jesus would have died for ME. He loves me that much. That was so mind blowing to me. I had been raised in a strict household, and my grandparents’ church had a lot of yelling and preaching about going to hell. I developed a view of God as being judgmental and looking to discipline me. But on the hike, I realized that God was a God of grace. I was saved on that trip. I was baptized in the river. I came back an absolutely changed man.”

His wife, Adelle, immediately saw the difference when he returned. They started doing morning devotions together, and they began enjoying more communication, intimacy, and connection than they had ever experienced.

Dealing With the Past

Even though Travis was a new person, he still had to deal with his past. Years before, he had been unfaithful to Adelle, and he had never told her about it. He wondered how he could be honest. A few months later, they celebrated their twelve-year anniversary, and Adelle wrote a post on Facebook saying how loyal Travis was. Someone made a comment questioning whether he really was. Adelle asked Travis what it meant, and Travis confessed what he had done.

“But on the hike, I realized that God was a God of grace. I was saved on that trip. I was baptized in the river. I came back an absolutely changed man.” – Travis Graham

Adelle was devastated. She felt alone, betrayed, and angry. She kept asking why, and Travis couldn’t give her an answer. All he knew was that he wanted to do anything he could to reconcile their marriage. He had a business trip scheduled, but he canceled it and called the owner of a marriage conference called “Serving Marriages” they had attended in the past. The owner found a place for them in the sold-out conference. Even though Adelle didn’t want to spend any time with Travis, she decided to go.

During the conference, they had the opportunity to meet privately with Dr. Gary Chapman, the conference presenter. Adelle told Dr. Chapman she didn’t think she would ever feel like forgiving Travis. Dr. Chapman said that if you wait to feel like forgiving someone, you will never forgive them. You make a choice to forgive, and your feelings will follow.

Adelle realized it wasn’t her job to punish Travis. She felt clear God wanted her in the marriage, so she tried to make decisions based on this knowledge. They kept working on their marriage, and Travis scheduled a six-day marriage intensive for them. At the intensive, they worked on their relationship with four other couples and two counselors. They were amazed at how so many of everyone’s marriage problems were rooted in a person’s past experiences in life.

“So much baggage comes from infidelity, and Travis had so much trauma before that. But God healed my heart.” – Adelle Graham

On top of what they were going through in their marriage, Adelle was dealing with major back pain. She had already had one surgery, and she had another scheduled to happen after the intensive. It seemed like horrible timing, but her recovery gave them three months to get to know each other like they never had before. During that time, they spent all day, every day together. They talked. They went to counseling, both together and separately. As a result, they learned how to communicate and have deep conversations.

“God gave me a clear vision that we were going to stay together if I was willing to do the work,” Adelle said. “So much baggage comes from infidelity, and Travis had so much trauma before that. But God healed my heart.”

Today, Travis and Adelle continue to grow their relationship, and they are passionate about helping others do the same. They lead a Seacoast Greenville small group for couples, and they are going on a Seacoast mission trip to Togo, West Africa, in July to lead a marriage retreat for Togolese pastors and their wives. Also, Travis coaches men to be leaders in their work, homes, and communities. He is writing a book called, The Noble Man.

“We want,” Adelle said, “to help others fight the enemy who wants to split marriages at all costs.”

At Seacoast, we believe healthy marriages don’t just happen—and they definitely don’t happen alone. Community is a key aspect of any strong marriage.

It’s All About Perspective