Is Foster Care For Us?

I had a very broken heart. I knew that God wanted us to be parents again, so I didn’t understand why we couldn’t have a baby. As I questioned and grieved, I started seeing and hearing about foster care everywhere I went.  Driving to work, I would see signs about it. On the radio, I would hear about the shortage of foster parents. Friends at the Seacoast Greenville campus shared their fostering stories. I couldn’t escape it.

Even though the message seemed clear, Zack and I weren’t sure if fostering would be right for us, so we talked and prayed about it… a lot! We went to an initial meeting and decided to take the training classes to become licensed for respite – short-term fostering that allows a child’s original foster family to take a break.

Then, in February of 2017, we got the phone call that would change our lives. A newborn baby needed a short-term home, and his biological mom would get him back when she got things ready for him. We had not planned to keep a newborn, but DSS recommended us for this particular child. On February 15, 2017, we brought home a three-day-old baby boy. 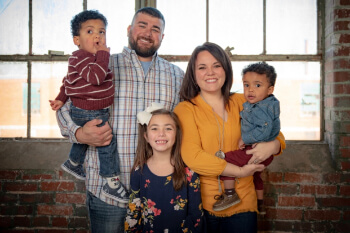 We thought he would only be with us for a few weeks. However, as soon we welcomed this little guy into our home, we knew in our hearts he was more than a short-term placement. By June of 2017, we had moved in his older brother, who was just 11 months older. We went from one to three kids in a matter of months! It was a big adjustment. Plus, our boys were considered “medically complex,” so we had to learn to juggle multiple therapies and appointments a week.

People asked me, “How do you do it?” My response was simple, “I just do.” God chose me to be their mother, and by being obedient with his plan, I could do it. I got tired, overwhelmed, and sometimes had a lot on my plate. But we wouldn’t have had it any other way.

The Support Of A Community

We were especially grateful for the love of our church. The outpouring of help and support we received from our Seacoast campus in Greenville was amazing. We were given diapers, formula, clothes, money from strangers, and meals for weeks. Thanks to Seacoast, we had the biggest support team through this process.

Our adoption of both boys was finalized in January 2018, making both boys “officially” ours. Even with the fostering phase over, we face many challenges. Every day is a new adventure and feels like a new problem wants to pull us down. Yet through my frustrations, I see joy. God has given me the ability to not only to raise two little boys, but to advocate for other foster children. As Romans 8:28 says, “And we know in all things God works for the good of those who love him, who have been called according to his purpose.”

What about you? Whether you feel called to foster children, or assist with supporting a family, there are several serve opportunities available.

Getting To My Father’s House