Just before starting college, Ann-Marie Rader went on a Seacoast mission trip to Togo in West Africa—and it altered the direction of her life. Her first day at Clemson University, she changed her major to become a physician assistant so she could help people like those she had met that summer in Togo. That was 20 years ago. Since then, she has gone on 25 missions trips, including Togo, Ghana, Peru, Kenya, South Africa, Nicaragua, Sri Lanka, and Haiti. 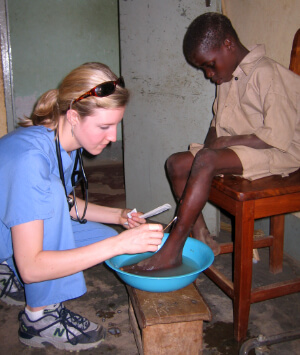 Ann-Marie treats a child’s wound on a mission trip in 2009.

Each trip, she has learned that even when God calls you to do something, that doesn’t mean it’s going to be easy. But God always comes through. On Ann-Marie’s most recent trip to Togo, the team arrived to a torrential downpour that would not let up—even though the rainy season was supposed to be over. It kept them from seeing any patients that first day at the outdoor clinic. The team prayed for the rain to stop.

And God…stopped the rain. No more rain fell during clinic hours for the rest of the trip! All the rain happened at night.

Young children who were suffering from malaria, with fevers of 105°F, and a sweet baby at 106.2°F, filled the clinic the next day. The team had never seen so many cases of malaria and their supplies of medications dwindled quickly.

But God…multiplied their resources. The pharmacy repeatedly told the team there was only medication enough for one more baby…then one more, and then another. Coartem (for malaria treatment) would randomly show up in another bag, or be found on the pharmacy table, or even in a package on the floor. They had just enough to treat every last patient.

Then two patients were carried into the clinic who hadn’t walked in two years. The medical team prayed over them and administered IV fluids, steroids, and pain medication.

And God said…the lame will walk. Both patients were able to walk out of the clinic on their own!

A man suffering from liver and heart failure had so much fluid in his abdominal cavity he could hardly breathe, but God…sent the right person at the right time. Dr. Ricky, an internal medicine physician, had felt a prompting to bring abdominal paracentesis needles with him on the trip this year—just in case. Dr. Ricky used those needles to drain 4.5 liters of fluid from this man’s abdominal cavity, enabling the man to take his first easy breaths in months! 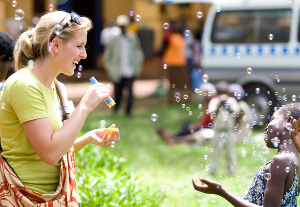 One afternoon, a woman arrived, carrying a beautiful three-month-old baby. She had come to the clinic the year before to be treated for infertility. She and her husband had been married for ten years and had not been able to get pregnant. The team had prayed earnestly for her, but could only give her vitamins, as the mission clinic had no infertility treatments to provide.

And God…answered her prayers. The next month the woman became pregnant! She was so overjoyed about what God had done, she wanted to show her baby to everyone at the clinic. And this year, she brought a friend with her who was also struggling with infertility and asked for prayer. So we will have to see what next year holds!

In all, the team treated over 1,500 patients. When we step out in faith, it can make a difference in so many lives—including our own.

Seacoast believes that the local church is the hope of the world and we equip and empower them to fulfill the vision that God has given them to reach their communities.

Trusting God With His Money