He Was Always by Her Side

Torria Warren was 14 years old when she decided God couldn’t be real because everything in her life was going wrong. Her mother, chronically ill for the previous few years, had a hard time keeping a job. Their family moved from place to place and lived in some incredibly bad situations.

Desperate, Torria took matters into her own hands, and got her first job at the age of 14. By 16, she was working two retail jobs and taking full responsibility for the family finances while her mom spent most of her time in bed.

Physically and emotionally exhausted, Torria reported her mom to the police for abuse and neglect. Her mom went to jail, and she and Christian entered the foster care system.

Torria clung to Christian when they were sent to Thornwell Children’s Home in Clinton, SC, but shortly thereafter, Christian was moved to another home, 65 miles away in Rock Hill. They’d never been apart, and over the next two months talked only once on the phone. Missing her brother terribly, Torria begged her caseworker to have Christian returned to Thornwell. Finally, her request was granted, but Christian wasn’t the same when he returned; he was angry, and opinionated, having had a hard time in the other home. Torria felt the distance between them, but still was grateful to be in the same children’s home with him again, though they lived in separate cottages based on age and gender.

Torria met Nicole in her cottage, and the two became friends, leading Torria to feel hopeful about the future – until a federal law changed the Department of Social Services’ approach to housing. The agency started closing group homes and placing children with families.

When Nicole was placed with a family first, Torria feared she would never see her friend again. Yet not long after DSS found a home for Torria and Christian, Nicole invited Torria to her birthday party. The address, she was shocked to discover, was not even three miles away.

Torria and Nicole started hanging out every weekend. Nicole’s foster parents are Christians who attend the Seacoast Church Greenville Campus. Although they tried telling Torria about God, she wasn’t interested. She thought Christians were judgmental and mean. But eventually, she went with Nicole one Sunday to church and started to see things differently. Not long afterward, she traveled to the Mount Pleasant Campus to go to Custom One Night with Nicole.

“Focus on God’s overwhelming love for you, and everything else will melt away.” – Jack Long, Student and Children’s Ministry Pastor, Greenville Campus

The overnight student trip allowed Torria to hang out with friends, hear a message, and experience worship. It also prompted her to start asking questions about God to Greenville Custom Student Pastor, Jack Long. Until her questions were answered, she told him she couldn’t start a relationship with God. Although Jack answered many of her questions, Torria had many more, so she accepted Nicole’s invitation to go to Custom Summer Camp.

It was in July, at camp on the third night that Pastor Jack reassured Torria, “Focus on God’s overwhelming love for you, and everything else will melt away.” And that night’s speaker later echoed Jack’s same words, “Here’s what I want all of you to know today: God loves you.”

Torria was closer than ever to giving her life to Jesus, but still something held her back. On the last night of camp, she went to the chapel, where a camp staff member, Daniel, was playing the piano. For a long time, she sat and listened before asking him questions about God, and his responses, so confident, made her feel more at peace.

But upon hearing of a student being healed through prayer later that night, she prayed sarcastically, “Well, God, if you’re healing people, I could really use some healing. I’ve got a lot of problems.”

She waited ten minutes and felt nothing. “God, I don’t know what I need. I need anything. Something. Please.”

Ten more minutes went by. Nothing.

“This was a complete waste of time.” As she tried to stand, she felt a hand on her head. She stopped. No one was around, but she definitely felt a hand. Was her head broken? She feared she was about to die. It was like her head was being lifted up. She tried to fight it.

She looked to the ceiling. “What could be important about the ceiling?” 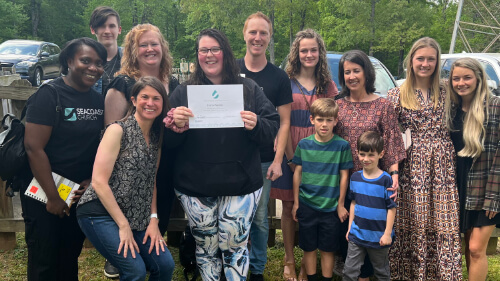 Surrounded by her family and friends, Torria was baptized on April 24, 2022, after giving her life to Christ at Custom Summer Camp.

It was then that peace, joy, and happiness flooded her body, and she started sobbing. She had been wrong when she thought God didn’t love her. He had been by her side her whole life.

She shared the experience with her small group, and Pastor Jack helped her say a prayer to give her life to Christ. Torria returned home with an excitement and passion for God, asking him to continue to grow and change her.

Seeing her brother, Christian, she hugged him and started crying. “I love you so much, and God loves you too.”

Now she was the one who seemed different. Thinking it was just a phase, Christian waited to see if his sister would return to the person he remembered before Summer Camp. But when she didn’t, he made the decision to commit his life to Christ.

Now, Torria attends church regularly and serves in Kidscoast. On April 24, she made the decision to be baptized. “Getting baptized was amazing. I felt like I was taking the next step in the right direction.”

The Surprise Blessing Of Praying For Our Children