A Higher Level of Healing

This is sort of a modern day loaves and fishes story, except it involves bagels. In April, some friends from my small group (College and 20s) and I decided to buy 30 bagels from a local business and hand them out to people in need in downtown Charleston.

The bagels went quickly and people seemed happy to have them. By the time we returned to the car, my thoughts were already shifting to what I was going to order at Chick-fil-A. But then we realized there was still a bagel left in the bag. How did we miss it?

It was just one bagel. What did it matter really if we gave it out or not?

But then the guy sleeping on a park bench in Marion Square popped into my mind. I decided to jog back to see if he was still there. 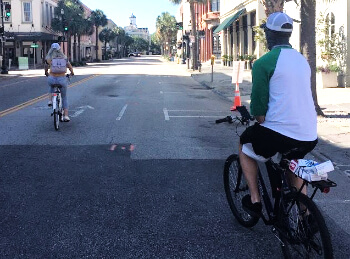 A College and 20s small group pedaled around downtown Charleston handing out bagels to people in need.

He was. And he was awake. Now that he was sitting up, I could see that he was probably in his early to mid-forties. As I approached, I called out, “Hey brother! Good morning!”

I startled him, but still he cracked a polite, half-smile. I explained I had an extra bagel w/cream cheese and asked if he would be interested. He looked at me for a long moment and then burst into tears. Obviously this was about more than a bagel with cream cheese, so I sat beside him on the bench.

“I haven’t eaten in three days,” he said, taking the bagel. As he ate, he told me that he had worked as a chef for a local restaurant, but lost his job due to COVID-19. Then he’d lost his apartment. And just the night before, he’d been robbed in the park.

I asked him his name.

“Well, Jerry, would you mind if I prayed with you?”

I prayed for Jerry, his situation, and all the people affected by the virus. I asked God to bring Jerry peace and comfort during these painful times. But when I finished praying, Jerry told me in a low, trembling voice that he’d been thinking of taking his own life.

In that moment, I felt a nudge from God, and I heard myself say, “Four months ago, I was suicidal. I thought about taking my own life…often.”

I have struggled with anxiety and depression for as long as I can remember. At age ten, I was diagnosed with attention deficit hyper-activity disorder (ADHD), and in my early teens, I experienced sexual abuse from a coach and bullying at school. At twenty-two, I was diagnosed with bipolar disorder (BD). I got used to letters defining me: ADHD, OCD, BD.

After a five-year stint of attempting to treat my diagnoses with psychotropic and pharmaceuticals, I felt defeated, discouraged, and had actually gotten worse. The depression and anxiety would frequently push through and resurface.

“If you can hold onto the tiniest bit of hope, and understand that all of this pain is temporary; it will eventually get better.” – Scotty Millen

I felt hopeless, like there was something wrong with me, and the most dangerous lie I believed: I was going to suffer like this for the rest of my life. I did not want to suffer forever. What type of existence is that? I began thinking of taking my own life—daily, sometimes hourly. No words can express the intensity, heaviness, depth and darkness of those thoughts and emotions. I truly believe that for someone to fully understand what those places are like; they must walk the valleys of the shadows of death themselves. I would never wish it on anyone.

Yet even as my eyes clouded with this darkness, I knew deep inside that those emotions weren’t from God.

“I came to a decision,” I told Jerry. “I was either going to end it or try to get better. The only reason I didn’t end my life was because I had a tiny sliver of hope. I chose to believe in that hope. If Jesus used the power of God to heal people, why couldn’t I be healed too?”

He picked his head up, tears streaming down his cheeks.

“If you can hold onto the tiniest bit of hope, and understand that all of this pain is temporary; it will eventually get better. Now, I may not understand your entire situation, but I have experienced the heaviness you’re going through. This is all temporary. You need to believe that. You need to hold onto that little bitty piece of hope. You are going to get your job back, a place to live back, and your feet back under you. But, you gotta have hope. I believe because of that hope it led me to have this very conversation with you today.”

Nodding, he wiped the tears from his eyes.

I will never forget that moment—nor, of course, Jerry. Praise God. I chose hope. And I pray Jerry does, too.

Romans 8:28 “And we know that in all things God works for the good of those who love him, who have been called according to his purpose.”

God let me shine a glimpse of light into someone else’s life, using my most painful and darkest moments—redeeming and healing them on an entirely new level.

None of those letters… ADHD, BD, OCD…define me anymore. They were never who I was. My identity comes from Jesus who has shown me a new peace. And now, I get to share the hope and healing power of God with you.

Making The Transition To The Most Unusual Summer