From Homeless to Harbinger of Hope

After her dad appeared on America’s Most Wanted, Nichole Johnson’s parents left town, abandoning her at the age of 11. Little Nichole, with blazing red curls was left to survive on the streets of the Arizona Valley.

“I wanted to die every day,” Nichole said. “I saw no future for myself.”

She roamed around Walmart at night, for safety reasons, and showered at community pool houses during the day. Finding places to sleep was an even greater challenge.

“I called friends, or friends of friends, and begged to stay with them,” she said. “Sometimes they’d sneak me through windows, or let me sleep in their parent’s car.”

As soon as she thought the Department of Social Services had been called, she’d leave—with or without a place to go. Sometimes she was on the streets for days, or even weeks. Friends would share food. She’d eat wild oranges. When she was craving a Whopper, she’d tell people at the mall she needed .25 cents to call her mom. “I also babysat and delivered drugs to people to earn money,” she said.

Nichole thought things were getting better when she secured a regular place to stay with a friend. Then the family announced they were going on vacation, without her, and she needed to find another place to go.

“I wanted to die every day.”

Days before the family was scheduled to leave, Nichole heard about a summer camp in California. When she told the family about it, they generously offered to pay for her to go. “I went to meet boys and smoke weed,” she said. But the camp, located on Big Bear Mountain next to a lake, had a small log cabin chapel. That’s where Nichole first heard a clear presentation about Jesus.

“When I heard about how much God loved me, that Jesus died for me, I thought, Why hasn’t anyone told me this before? I knew it was true.”

Later, the same family, who paid for camp, coordinated a temporary placement for her with a close friend of theirs, a woman who managed a rock band by day and ministered to prostitutes at night. The woman insisted on sleeping in a spare bedroom and gave Nichole the master.

“She treated me like royalty, taking me shopping for good shampoo and clothing. She even left her expensive jewelry out. When I asked her why, she told me I wasn’t a criminal.” 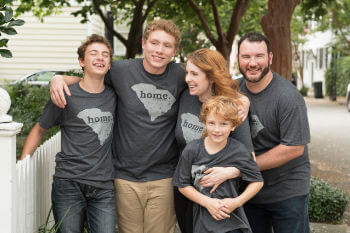 Nichole has now been married for 19 years and has three sons, one of whom she adopted at the age of 16.

Because the woman was on the road a lot with the band, she couldn’t keep Nichole, and eventually DSS got involved. This led to a string of temporary placements where Nichole overheard conversations about how she was wild and unmanageable. Her last placement was long term, but abusive.

“They were Christians. The woman was actually a noted author and speaker, but their marriage was unhealthy, and it got taken out on me,” she said.

These negative experiences didn’t alter Nichole’s faith or her identity in Christ because she believed she was loved and valuable to God. But the abuse fueled her desire to get out of foster care. She studied for her GED and passed at the age of 15. One year later she was accepted to Columbia Bible College, received a court-ordered emancipation, and moved to South Carolina.

Yet, Nichole still felt alone. “There’s no one to invite to graduations, no mom to take you wedding dress shopping, and no grandpa when the babies come. Every event is a reminder that you don’t have family like everyone else,” she said.

“I promised myself if I survived my childhood I would help someone else.”

Nichole would often remind herself that she did have one person in her corner. Although she had lived with the woman who managed the rock band for only a few weeks, they stayed in touch. “Every birthday, holiday, and major event I got a card or a present. She was the most excited when I got good news and would call and worry when hurricanes were coming our way,” she said. “She was my mentor until the day she died.” 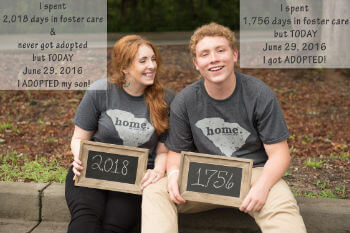 Nichole has now been married for 19 years and has three sons, one adopted at the age of 16. He’s now a grown man who lives on his own and works full time for an aviation manufacturing company.

“I promised myself if I survived my childhood I would help someone else,” Nichole said. “God rescued me from the pits of death, like in Psalm 40:2, and I feel fortunate if he can use me.”

Nichole hopes to work with foster kids doing trauma therapy and is in her senior year of her social work degree. For now, she’s the Independent Living Director at a foster boys’ group home, and volunteers with Journey Together Ministries, a foster and adoptive training and support group.

“Kids in care have an enormous burden and they need help making the burden smaller,” she said. “You have to believe you can make a difference in a short period of time, that these kids are a divine appointment.”