Memorial Day: A Time To Reflect On Sacrifice

Greater love has no one than this: to lay down one’s life for one’s friends. John 15:13

On Memorial Day, we honor and mourn those who have given their lives, serving in the United States Armed Forces. Many have lost their lives on the battlefield, but for some, the sacrifice and repercussions stretched into the years afterward, extracting the same price to be paid more slowly.

When Army Staff Sergeant, Jerry Gillespie, finished his second tour in Vietnam in 1974, he and thousands of other soldiers looked to the future, hoping to put a traumatic part of their lives behind them, hoping it would end with the war. But a softly falling mist called Agent Orange proved to be as lethal as any enemy with a gun, and followed them home. 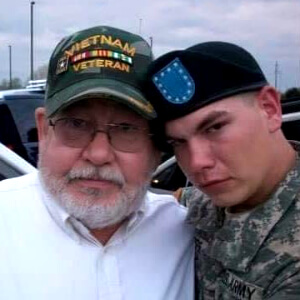 Sprayed over huge swaths of Vietnam, Agent Orange initially had been thought to save lives: defoliating the dense jungle enough to take away enemy hiding places. Jerry Gillespie was in some of the worst affected areas, many clustered near former U.S. Military bases like Bien Hoa, north of Ho Chi Minh City. He had no idea that he was being exposed to dioxin, a chemical now associated with the development of at least 15 debilitating illnesses, including heart disease and numerous cancers. In the years after the war, Jerry would eventually suffer heart disease, five heart attacks, diabetes, and two strokes, and ultimately in 2013, he would pass away.

“My dad never shared much about the war,” Blaze Gillespie said. “But he had a respect for country and for soldiers to the highest degree. He had been an eye witness to the ultimate sacrifice many times over.”

In His Father’s Footsteps

Blaze, who attends Seacoast’s Columbia Campus, chose to follow in his father’s footsteps and join the Army. “I remember the exact moment I decided to do it,” Blaze said. “It was in October 2008 and I was 18. I asked my dad for money to go out one night when I was feeling down because I’d just come out of a relationship. Without hesitation, my dad took $5 out of his pocket—the last he had—and gave it to me. I knew I wasn’t going to spend it on anything worthy, and my Dad knew it, too, but he cared so much that he gave it anyway. The realization hit me so hard that it made me cry. I gave the money back and went to the Army recruiting office the next day. I needed to become my own man. My dad taught me that work is part of life and failure doesn’t exist if you keep trying.”

“The sacrifice that the day represents is almost Godlike, giving your life for others. It’s the true tribute to ‘If not me, then who?’” – Blaze Gillespie

Blaze’s assignments in Korea and at Fort Bragg, NC, gave him new perspective and deepened his understanding that his father’s wounds weren’t limited to the physical. “Back then, it wasn’t diagnosed as PTSD,” Blaze said. “They thought you were just crazy. So many soldiers didn’t get help. My dad tried to block it out, but he had terrible nightmares. As a kid, I learned fast, it was a really bad idea to wake him. If you touched him, he’d wake up swinging. So I’d tap his foot and run.”

Before Blaze was born, his dad got out of the Army and tried to become a firefighter. But during a house fire, a 7-year-old boy died from smoke inhalation. “I guess my Dad sat outside that house for hours, the boy’s death bringing back memories of Vietnam. Still, he kept it all inside until he and my mom had a big argument. Eventually my dad told her, all in one go, the worst of what happened in Vietnam.”

For years, Blaze saw how PTSD never quite released its hold on his dad’s mind. “But the mental strength it took to fight it,” Blaze said, “and be such a good dad is unbelievable. And his faith was a big part of that. He used to pile lots of the neighborhood kids into his truck with us and take us all to church.” During the service, Blaze recalled standing next to his dad and listening to him sing ‘The Old Rugged Cross.’ “Sometimes,” Blaze said, “his deep voice would crack and I’d see him cry and his legs would shake. But other times, there was just this joy in his face.”

The song “That’s My Job” by Conway Twitty reminds Blaze of his dad.

That’s my job, That’s what I do
Everything I do is because of you
To keep you safe with me.

“My dad was a protector, and a man of faith. I can still hear him saying I needed to remember that God loved all people and our faith is for the good and the bad. We need to trust God’s decisions and find peace in forgiveness.”

Blaze intends to pass on what he learned from his father to the next generation, to his own family and to the kids he coaches. For the past 10 years, Blaze has been the physical education teacher at Lee Central High School in Bishopville, SC and has served as the linebacker coach and assistant baseball coach. Coaching is what he wants to do for the rest of his life—and every day he hopes he can embody to his family what his dad was to him—his best friend and protector.

“Memorial Day is a day of mixed emotions for me. It’s a special day to honor my dad, but it’s also a day of weeping. The sacrifice that the day represents is almost Godlike, giving your life for others. It’s the true tribute to ‘If not me, then who?’”

If you have experienced significant trauma and you think you may be suffering from  Post Traumatic Stress Disorder (PTSD) there are many resources available to help you.

Christian Counselor Database
If you are searching for a Christian counselor, this database allows you to learn about your options before selecting one that you think will be a good fit for you. You can also locate therapists in your area using the search function.

The MUSC Institute of Psychiatry offers patients, caregivers, and their professional providers access to the latest evidence-based practices and advances in research. To schedule an appointment call 843-792-9888 or visit muschealth.org.

In the Columbia, SC and Conway, SC, and Mount Pleasant, SC area, Reboot Recovery is available to help people recover from trauma. They are open to military, first responders, and their families.

Magnolia Center Charleston brings encouragement and hope to those negatively impacted by addiction, trauma, anxiety, hopelessness and depression. To make an appointment, call 843-225-8052 or visit MagnoliaCenterCharleston.com.

PsychMYway is a South Carolina based outpatient telepsychiatry practice that specializes in the treatment of children, adolescents, and adults that are challenged by mental health difficulties. To make an appointment, call 843-608-8798 or visit PsychMyWay.com.

What Dandelions Can Teach You About Parenting