Is the Men’s Hike Really Life-Changing?

Back home in Germany, Thomas Giele and his family didn’t go to church often. “The shame is many Germans are losing their faith,” Thomas said. “I was raised Roman Catholic, but in Germany, it is almost that you have to apologize for your faith in God now. But here in the U.S., it is different.” In 2018, Thomas and his wife, Anna, and two young daughters moved to South Carolina when his company transferred him to its manufacturing plant in Summerville.

Living in a new country and anxious to connect in the community, the Gieles tried more traditional churches before finding Seacoast. “Seacoast was like sitting in a musical!” Thomas said. “And the message was current and about modern life. Seacoast got us directly from the beginning. We started going every couple weeks.”

One day at the community pool, a neighbor who attended Seacoast, told him, “Dude, you have to go on the men’s hike.” 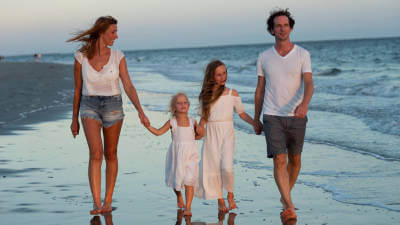 Anna supported him, even though she knew it meant her husband would go with people she didn’t know, to an unknown remote location, and she hoped he’d come back well and happy. “Whatever it takes for you to be able to go,” Anna said. Thomas enjoyed the pre-hike meetings and the chance to get to know other men going on the trip. Long before reaching the mountain, he felt that he was already part of a team.

Thomas didn’t have specific expectations for the October 2020 hike—which in hindsight, he realized gave him an openness with God that he might not have had otherwise.

Around the campfire, leaders posed a question to the men: What do you want to change in your life? As the men stared into the crackling fire, they began to share and open up. Thomas was surprised how old wounds surfaced—even in himself, stuff he hadn’t thought about in years, from as far back as childhood. At first, he listened rather than sharing, trying to understand what was coming up inside him. There was no pressure to talk. It was up to you.

While on the mountain trails the next day, Thomas let himself relax into the beauty of nature and the physicality of hiking, focusing on the here and now, listening to the sound of his own breathing and steady steps. It was then he felt an overwhelming presence hit him, at once amazingly unique, and yet familiar, a coming home. “I knew it was the Holy Spirit,” he said.

Experiencing the presence of the Holy Spirit on the mountain that day would have been enough for Thomas, but God had more in mind. That evening he shared his story, and his teammates prayed over him, which gave him peace for the night.

It was then he felt an overwhelming presence hit him, at once amazingly unique, and yet familiar, a coming home. “I knew it was the Holy Spirit.”

The following morning was cold, near 48 degrees, and warm hands wrapped around steaming coffee mugs seemed one of life’s great blessings. As the men began to worship and communion was offered, the sun beginning to shine and Thomas heard inside his mind, Let it go. Let it out. It’s fine. He moved back from the others, feeling himself melting down.

“It was an unbelievable experience,” Thomas said. “The emotion was so much. It took me some time to be able to take communion. I knew what needed to change in my life, but had I ever asked myself how it had gotten to be that way in the first place? Now I knew where it came from, what needed to change. Something went through me, telling me to keep all this going.”

Returning home from the hike, Thomas shared with Anna, his experience and what had been stirred up inside him. “Now we talk in a different way,” Thomas said. “We have been together over 19 years. Before, I think I was playing a role. Everything was fine and I never talked about my own problems. Now I am not afraid to talk about things. And I have a much better relationship with my wife and my children. And now I am connected at church, in the men’s ministry, and in a small group that formed from the hike. I see what can happen when you open up. Trust. It is amazing. The hike was the greatest experience I have had here in the States by far.”

Not long after the hike, Thomas met up with his neighbor from the community pool.

“You were right after all,” Thomas said.

“The hike is life-changing.”