No One Walks Away Unchanged

In the Bible, when people first meet Jesus, their reactions are never neutral. Some walk away confused, or even angry, while others are healed and full of joy and purpose. One thing is clear: No one walks away from Jesus unaffected.

Never discount the beginning of a story. Right from the first chapter of John’s gospel, he starts off strong, telling us who Jesus is and what he came to do. Jesus was with God from the very beginning, and through him the world was created. He came to be the light of this world. That’s huge and powerful. This is who Jesus is.

John then shifts the focus to a different John—John the Baptist—whose purpose is to point out the Messiah, to testify and bear witness that Jesus is the Son of God. John was baptizing with water, which served as a public declaration for people. Yet Jesus would baptize with the Holy Spirit, offering them—and us—inner transformation. 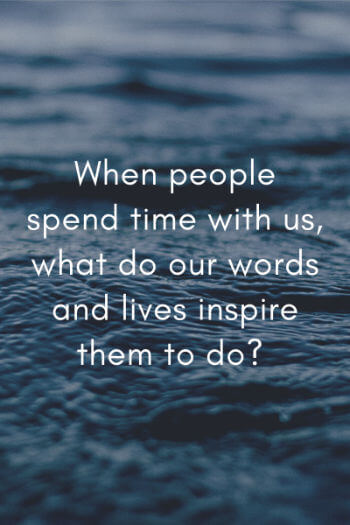 Look closely at this first chapter and you’ll see powerfully revealing language about who Jesus is and who we were made to be—his followers who point others to him. It can change everything about us—if we allow it.

Soon after John the Baptist sees God’s Spirit descend on Jesus like a dove, John tells two of his disciples, “Look the Lamb of God who takes away the sin of the world!” (John 1:29 NIV). Once John says this, his loyal followers become Jesus’s followers (1:37). He deliberately points them to Jesus.

When people spend time with us, what do our words and lives inspire them to do?

Seeing John’s disciples following him, Jesus asks: “What do you want?” This is the Son of God who was “with God in the beginning” (1:2, NIV). He knows the answer. Jesus is only asking because John’s disciples don’t know the answer. Their response makes this clear. “Where are you staying?” (1:38, NIV). In Hebrew culture, to ask someone where they were staying was a request to spend time with them. These disciples wanted to spend time with Jesus to learn more about him.

Do you know what you want? Do you believe the One who “was with God and who was God” (1:1, NIV) can help you answer that question?

What’s in a Name?

Andrew, who had heard John the Baptist’s testimony, was one of the men to spend the day with Jesus. Not long afterward, he seeks out his brother, Simon, and tells him they found the Messiah. When he takes his brother to Jesus, Jesus looks at Simon and says, “You are Simon, son of John. You shall be called Peter” (1:42, NIV). Again, context is everything. The cultural implication was massive. In our culture, nicknames are pretty common, and when a couple has a baby, who gets to name that child? The parents! Only they have the right to name that child. But in first-century Israel’s patriarchal culture, the man held more power than the woman. It was the father who had the authority to name the child. That Jesus would suggest a new name for Peter would have been culturally out of bounds—unless he had the authority of a father. So Jesus is saying, I am one with your Heavenly Father, and his authority is my authority. Not only did Jesus give Simon a new name, he gave him a new identity and purpose. Simon would become Peter, the rock upon which Jesus would build his church.

Not only did Jesus give Simon a new name, he gave him a new identity and purpose.

From what or from whom do you get your identify and purpose? If it is not the One who made you, you may find yourself frustrated to become who you were made to be.

A day later, Jesus invites a man named Philip to follow him (1:43, NIV). The invitation isn’t accompanied with any promises or benefits. But the Greek word John uses here is packed with significance. It means “join” or “accompany.” This didn’t mean to literally walk behind Jesus. It meant join him on a journey that would change everything for Philip. When Jesus says “follow me,” he isn’t suggesting we walk behind him as just devotees or subjects; he is inviting us to be his companions on a journey that will change our lives forever.

Have you accepted his invitation? If you have, how can you pull in a little closer?

Healing Your Relationship with Your Mother As An Adult