My husband, Adam was born with hydrocephalus—excess water on the brain. When he was five months old, he had his first brain surgery where a shunt was placed in his brain to help regulate the flow of the cerebral fluid. When he was in seventh grade, the original shunt had to be replaced, but for the next 20 years, things seemed okay. In 2000, that changed drastically; from then on, Adam had at least one brain surgery every year, his shunt often malfunctioning.

“I put God in this little box that said Adam could only be healed if he was at the service.”

This past summer, Adam started showing signs of a brain infection. This is much worse than a typical shunt malfunction, as it can lead to brain damage, or even death. Desperate, I did something I’ve never done before: I began to claim healing for him.

Adam was admitted to the Medical University of South Carolina (MUSC) on August 5. To be honest, I was devastated that I wouldn’t be able to take him to Seacoast’s upcoming prayer and healing service on August 7. I’d convinced myself he’d be healed there. I put God in this little box that said Adam could only be healed if he was at the service.

Wes and Hannah Pickering and Abigail Bobo were at church, as guest speakers for the healing service. I decided to stand in for Adam and ask for prayer for his healing. Being an extreme introvert, this was terribly difficult for me, so I waited until everyone else had been prayed over before asking for prayer. I waited in line for over three hours, but I left feeling like we were going to experience a miracle.

“I was still believing that Adam would be healed on Wednesday. Except he wasn’t. He got sicker.”

Shortly after I got home, I got a call that Wes, Hannah, and Abigail wanted to go to MUSC to pray over Adam. I began to shake; I just knew this was our miracle! I met them at the hospital, knowing Adam was incoherent and wouldn’t be able to communicate. While they were praying, one of them prayed for Adam’s neurons to be reconnected. I thought, Well, that’s not how that works. Then I immediately heard, “How do you know?” I rarely hear from God like that, so I stopped doubting and said, “Yep, reconnect his neurons. That’s cool!”

That was on Tuesday. I was still believing that Adam would be healed on Wednesday. Except he wasn’t. He got sicker. That Friday, Adam went through brain surgery, #22. A normal shunt revision lasts 1–3 hours; this surgery was 30 minutes—just a clogged valve. I was sure we had our miracle! He was released three days later, his shortest hospital stay to date!

Over the next two weeks though, Adam had a lot of pain and side effects. He couldn’t eat and he certainly couldn’t work. I had him in the ER several times, and then finally he was readmitted. With no sign of infection, the neurosurgery team couldn’t figure out why he wasn’t getting better.

A few days later, Adam had surgery to externalize the shunt. A tube was run from the shunt in his brain to an external bag for several days, and the pressures in his brain were monitored hourly for any changes. This procedure causes horrific pain, and for that reason, is typically done only for a few days. Adam endured it for 10. During that time, Adam didn’t pray to be healed. He didn’t pray to even feel better. It’s hard to share, but during that time, he prayed that God would take him home. He was in such agony, he just wanted it to end. He was barely able to form rational thought, but when he did, he prayed for death, so he would be finally whole and healthy. But he had a team of people praying for him, supporting him, believing a miracle was coming.

“In my mind, I had been praying for a temporary healing. I wanted him to be okay “this time.”

During that time, we had a hurricane in Charleston. As terrible as that sounds, compounding things, it made it so Adam’s neurosurgeon was there at the hospital right after the hurricane to treat someone else; otherwise he wouldn’t have been there for one of the most important decisions of Adam’s life. Amazingly, the doctor now believed Adam no longer needed the shunt to help regulate his cerebral spinal fluid.

I’d been praying for a miracle, but I kept repeating to his doctor, “So you’re saying he doesn’t have hydrocephalus anymore?”

Adam would have to endure one more surgery, but this one was to put in a non-programmable shunt. 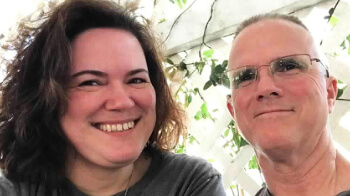 Adam and Lori were all smiles after being released from the hospital following Adam’s four brain surgeries in six weeks.

“So you’re saying he doesn’t have hydrocephalus anymore?” I repeated. I knew it was true, but it was just so amazing. In my mind, I had been praying for a temporary healing. I wanted him to be okay “this time.” After so many surgeries, I just wanted him to have a break. But God…he does immeasurably more than we could ask or imagine. He healed Adam completely.

I’ve done a lot of reflecting on our miracle. This past Christmas, it occurred to me that our Heavenly Father loves to give us gifts, just like we love to give our children gifts. He knew this miracle was coming for Adam since before knitting him in his mother’s womb. He knew we would have to go through the valley for those 51 years, but none of it was a mistake. None of it was outside his plan. It was all necessary—all 26 brain surgeries—for Adam’s healing to be known for the miracle it is. Because it all led up to this greatest of gifts. I bet God was so excited to give us the biggest desire of our hearts. Miracles happen; we just need to ask and believe.

God is so good. The second half of our story starts now. Anything is possible.

A Lifestyle of Forgiveness