Relationships Can Be Hard, But This One’s Different

Imagine you’re out with a friend one day and they announce that they’ve fallen in love. “That’s great!” you say, “who are they, what are they like?”

“No! That would be silly. Of course I know things about them.”

“I mean, are you planning on at least finding these things out?”

Ok, this is kind of silly. This conversation doesn’t really make sense and I doubt any of us have had one like it. Saying we love someone but not being interested in them is an obvious contradiction.

When we love someone, or something, it’s like there’s a switch that flips inside of us: We HAVE to know more. This is true whether the object of our love is a sports team, a series of books, a type of food, or a person. If you told me you loved your spouse but couldn’t answer the most basic questions about them, I would have serious concerns about your marriage!

So being in love means wanting to know everything about who or what we love, why do we treat God differently? Here’s what I mean. When we talk about theology, or studying the Bible, it can make people tense up. Their eyes glaze over, maybe they change the subject. I’ve heard many objections to studying theology by people who say things like “Christianity isn’t supposed to be academic, it’s supposed to be a relationship.”

“We serve an incredible God who has invited us to know him better and has given us the means to do just that.”

Which is my point exactly! It’s entirely fair for people to be hesitant when we talk about “studying” a part of our faith. It can conjure images of debates and people yelling at each other. Or perhaps it almost makes us fall asleep, picturing tweed-clad professors droning on about theological minutiae. Perhaps worst of all, some of us have even been a part of churches who split apart because of a disagreement about God.

None of these things are imaginary—they all do exist. I was that guy in college, arguing the finer points of Calvinism at 2:00 a.m. in the dorm. But our faith doesn’t have to be defined by any of them. Having a relationship with God means that we should want to learn what he is like. It’s no different than falling in love and needing to know everything about that person.

The good news for us is that God WANTS us to know him. It’s good news because if God wasn’t interested in having a relationship with us, there would be nothing we could do about it. God is so far beyond us that there is nowhere we could go to find him. But God hasn’t hidden himself; he has revealed himself to us. Paul, speaking to an Athenian audience, noted how many gods and goddesses they worshipped. Paul said that the true God they sought was not a mysterious and unknowable being, telling them “he is actually not far from each one of us (Acts 17:27)”. 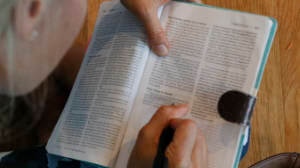 God wants to know us and for us to know him. It’s why he revealed himself to Abraham and Moses, why he came to earth as a man called Jesus. It’s why he has gifted us the Bible, where we can read what he has said and done. It’s why he says we can have access to him directly through prayer, a literal conversation with the God of the universe.

Do we take advantage of these things? Do we study the Bible to learn more about the God we say we love? Do we spend time talking to him in prayer? I can remember spending hours on the phone in high school and college with the girl I was dating (or wanted to date) and the ridiculous “no YOU hang up” back and forth. Are we as eager to speak to God as we are to speak to a crush?

No matter where we are in our relationship with God, let’s commit to start again. There is no wrong time and it’s never too late to get to know God better. We serve an incredible God who has invited us to know him better and has given us the means to do just that.

What’s God Saying To You?