Relief In The Midst Of A Storm

This past September, Hurricane Florence took its time crossing the Carolinas, dropping record levels of rain. In the hurricane’s wake, rivers continued to rise for weeks afterward and flood places like Conway, SC, causing widespread damage and displacing people from their homes.

Staff at our newest campus, Seacoast Conway, jumped into action even as their own homes and families were impacted by the hurricane. They handed out water and snacks to people stuck in traffic for up to five hours on the highway in front of the church. Not long afterward, Seacoast Conway was designated one of the city’s distribution centers for food, water, diapers, cleaning supplies, and toiletries.

We have heard so many stories of support, encouragement, and hope. This is just one.

Late on September 29, a young mother with an infant and toddler messaged on Facebook that she needed food and diapers but had no way of getting them because her car was under water. Their home had flooded and FEMA had placed her and her family in temporary housing. 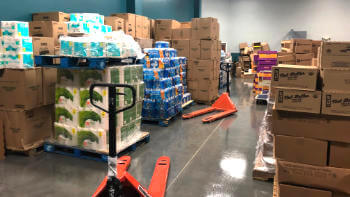 Not Going to Stop Them

The next afternoon, three members of Seacoast’s disaster relief team boxed up food, diapers, cleaning supplies, and some socks and underwear, and set off in rain pouring so hard it closed down the nearby 501 Bypass. When the team arrived, they discovered the address was an apartment complex with 20 units in the building. They had no unit number. Once the rain eased, they went door to door until they found the young family.

“You really can’t imagine how badly I needed to just know that people care.”

The young woman answered and at hearing they were from Seacoast, said, “You’re here? You came? I didn’t think anyone would come!”

Later, she sent the following message: “I had been crying on and off all afternoon and then heard you all knocking. You really can’t imagine how badly I needed to just know that people care. Thank you so much truly. God will provide when you need it the most, materially and spiritually.” 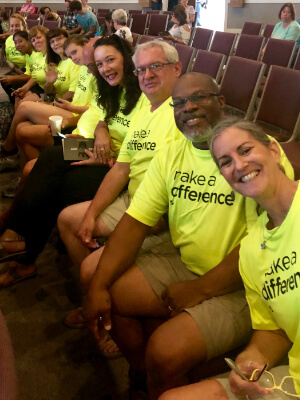 Teams from Seacoast campuses joined the relief efforts in Conway.

Seacoast disaster teams are now cleaning out houses as the waters recede in the Carolinas. So many homes still need to go through the long process of gutting and repairs. Plus, the near-Category 5 Hurricane Michael has spread even more catastrophic damage across several states. Day by day and step by step, we are making a difference as everyone tries to do their part and God sends us where we need to go.

What about you? How can you help love and serve communities affected by these powerful storms? Visit relief.seacoast.org/ to give in support of relief efforts or join a team serving in the communities.

A Veteran’s Story Of Service and Sacrifice