A Series of Miracles in Difficult Times

In the time of COVID-19, everyone’s life has been disrupted in one way or another. But for Robert “Woody” Smith, COVID-19 interrupted more than just a lifetime milestone, a vacation, or even a steady paycheck—for Woody, COVID-19 threatened to prevent him from receiving a life-saving surgery.

For 20 years, Woody has been battling myelofibrosis, a rare form of blood cancer. Late 2019, Woody found out he would need an “all or nothing” bone marrow transplant, an “at-risk procedure” that can be fatal. “A bone marrow transplant is like trading in one disease for another,” Woody said. “If a person’s body rejects the transplanted stem cells as they attempt to regrow non-cancerous fibers in their body, it could kill them.”

But this was his shot.

For treatment, Woody would have to live near the Seattle Cancer Care Alliance for at least six months, which meant they would have to find a way to get an immunocompromised Woody across the country during the onslaught of a worldwide pandemic. So, Woody and his wife Joan started planning their cross-country move to Washington, which was no easy task. But due to COVID-19, the hospital where he was to be treated, canceled all transplants. 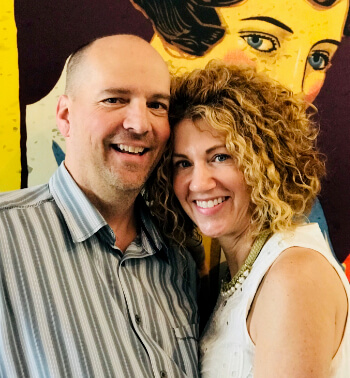 It was the first week of May when Woody and Joan got the call they had been hoping for: The Seattle Cancer Care Alliance was ready for Woody. Not only was the hospital starting up transplants again, but a donor had donated blood for Woody’s procedure. It was finally time to move.

They should have been excited, but felt more than a little overwhelmed. To clear their heads, they went for a walk, during which they encountered a “lovely, old couple” they had passed several times during quarantine. Normally, couples simply walked by one another, but this time, they struck up a conversation, which led Joan to ask the name of their dog.

“Surely,” they were told. “Surely, not Shirley.”

And Psalm 23 leaped into their heads.

Surely goodness and mercy shall follow me all the days of my life: and I will dwell in the house of the Lord forever.

That was enough for them; God reset their resolve.

They were going to Seattle for the treatment Woody needed.

A Series Of Miracles

According to Woody and Joan, their journey would not have been possible without a series of miracles, which they point out as the most amazing part of their story.

Miracle One: strangers in Seattle offered to take their rental off of Airbnb and give up their home to Woody and Joan for as long as they needed it. They are even making modifications that would help an immunocompromised Woody stay safe by installing extra doors in the house and setting up an extra bedroom for Joan who would need to sleep separated from Woody during his treatment.

Miracle Two: Joan’s sister had an old friend from college who lived in Seattle, who was willing to loan a car to Woody and Joan for their entire stay.

Miracle Three: The doctor originally slated to perform a progressive surgery to remove Woody’s enlarged spleen had been set to retire earlier in 2020, but he made the decision to stay on until he completed Woody’s surgery.

Miracle Four: And on top of all of those blessings, one courageous donor had agreed to give in spite of the craziness and fear that COVID-19 caused, something Woody and Joan hope others might consider doing, as it is easy, safe, and could save lives. (For more information about being a possible donor for a cancer patient like Woody, visit Be The Match).

On May 29, Woody and Joan will pack up the ten tubs of their belongings, their two fur babies, Pony and Elke, and take a private flight to Seattle, a necessary precaution to limit Woody’s exposure to germs as he moves across the country.

How are they preparing?

“Big time leaning on faith,” Woody says, explaining that he is already amazed by the way God has worked out the details, and how God has put him in touch with so many loving and generous people. It is an exciting time, he thinks, that lay ahead of him, though a frightening time to be sure. To get through it, Woody just plans to combat his fear with his faith, trusting that God will have the last word.