The Wrong Path Made Right

“I thought God just made me a bad person,” Nick Walker said. “I thought he gave me this weakness from birth. Even in high school, I felt different from my friends. They could go out partying and then stop. But I couldn’t. I always kept going.”

A dangerous new road opened when Nick was 17. After his dental surgery, he was prescribed hydrocodone, an opioid to treat severe pain. “I loved the feeling of it,” Nick said. “And not long after, I took it again for a knee injury.” Once his prescription ran out, he faked injuries to take it again. When doctors refused to prescribe the pain meds anymore, Nick resorted to finding it on the streets. “I went from swallowing pills to snorting…to injecting.”

“This drug completely took away my care for life—my own and everyone else’s.”

Nick blew his college scholarship to Tennessee and his life spiraled. For a long time, his parents had to love him from a distance. “I had a good childhood. I had what I needed and my parents loved me. This illness doesn’t always come from abuse or a horrific situation. This illness doesn’t discriminate according to money or upbringing. I just lost my way.”

For 15 years, Nick was locked in addiction, the last five of which were on heroin. “It takes your soul away,” he said. “I became someone I didn’t recognize. I robbed a pharmacy store. I walked up behind this lady and when the cashier popped the register open, I reached over the counter and grabbed as much money as I could and ran out of the store. On the road, I was swarmed by police yelling at me at gunpoint to get out of the car and on the ground. It was the worst day of my life. I will never forget lying there, thinking… ‘Look at me. Look what I’ve become. I am gone. This is it for me.’ Amazingly, the store dropped the charges in court. I could’ve easily been killed that day. This drug completely took away my care for life—my own and everyone else’s.”

Nick tried seven different treatment centers, but could never hold it together for more than a few months. He couldn’t keep a job either. Three separate times while on heroin, he lost consciousness and stopped breathing, having to be punched and slapped in the face to be woken up.

“This illness doesn’t discriminate according to money or upbringing. I just lost my way.”

In January 2018, Nick checked himself into a detox center, thinking here we go again. He didn’t think it would make any difference. But something inside him wasn’t ready to give up.

Something Different This Time

That first night in his room at the detox center, Nick went through his routine of stuffing his bag under his bed and setting out his shoes. Already on his knees, he decided to pray. He had always believed in God, but couldn’t get past the idea that God had given him this innate weakness. 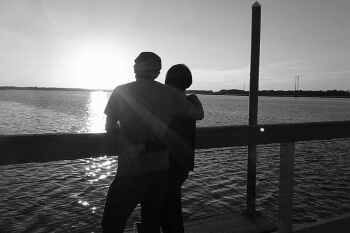 He felt at such a loss. Most of the heroin addicts he knew…his friends…were already dead.

“Can you please help me, God?”

Exhausted, he went to sleep and began the next day as he had many times before, answering the nurse’s initial check-in questions. But then he was asked something new. “Have you tried replacement therapy?”

“No. You could get addicted just as bad with that.”

The nurse gave him a blank look, shrugging. “Could it be worse than where you are now?”

Nick decided to discuss it with his fiancée, Rebecca, who had stayed by his side for 10 years. Rebecca, it turned out, had been researching replacement therapy on her own. Recognizing the serendipity, Nick agreed and signed up for the program, soon receiving free counseling and assistance to pay for the medication.

“I felt like God was saying, this is the time,” Nick said. “I felt his physical presence—not just as the Creator of the universe, but personally. He was specifically there…for me. It was then I gave it all to him, all my struggles. Before that, nothing had been enough to save me—not great parents or a happy childhood, not a fiancée who had believed there was something in me worth holding out for, not even my two children. Nothing was enough…until my relationship with God.”

Returning home after detox, Nick received an unexpected call from a friend from high school, telling him of a job opening. “And it was good money!”

Nick has now been clean for 20 months and he’s really happy with his job. “I’m not that same person anymore. God has given me a new life with my children, fiancée, and the rest of my family. God has helped me overcome so much.”

“Before that, nothing had been enough to save me—not great parents or a happy childhood, not a fiancée who had believed there was something in me worth holding out for, not even my two children. Nothing was enough…until my relationship with God.”

For several years, Nick attended the Seacoast Summerville Campus off and on and even got baptized. “I always knew it was a place where lives changed—I could see it in people’s faces. But before this last time in detox, I never thought that would include mine.” Nick began going to Saturday morning prayer and to church every Sunday. “I sit right in the front row. I dance and sing and give all the glory to God. I still feel like I’m dreaming sometimes, except the bad dream is over now. I like this one. And it’s real. It’s not a dream. I have arrived…hand in hand with God.” 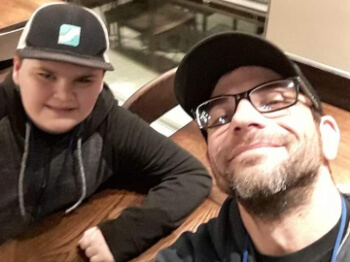 Nick’s two children attend church with him. His son serves on the Tech Team, and his daughter is on the Kidscoast Worship Team.

For now, Nick knows he needs to concentrate on his family, but his dream is to open a treatment center. “God has given me another chance, but he never allows me to forget where I was. I have a purpose. I need to be out there fighting this war to help others. When Seacoast played the Restoration film about addiction, it really hit close to home. It was tough to watch. I could hardly swallow, I was so choked up. It hurts to see others struggling with this. I’d not believed before that I had a chance to recover. But God has completely taken away that craving. I’m here to say, you can recover. Just don’t give up hope.”b

But he said to me, “My grace is sufficient for you, for my power is made perfect in weakness.” Therefore I will boast all the more gladly about my weaknesses, so that Christ’s power may rest on me. ~ 2 Corinthians 12:9

What about you? What have you learned from the difficulties in your life that could help someone else?

If you are struggling with addiction, or know someone who is, Seacoast Church offers Celebrate Recovery at both the Mount Pleasant and Summerville Campuses. These courses are designed to provide a safe place to share your story and begin to take steps toward freedom.