What To Do When You’re Praying For A Miracle, But You Have To…Go

Written from an interview with Tracy Kerr

The beauty of the mountains covered in glinting pristine powder made Tracy Kerr forget how treacherous the slopes could be. Skiing on a particularly difficult run in the Wasatch Mountains of Utah, she fell and hit her head, hard. 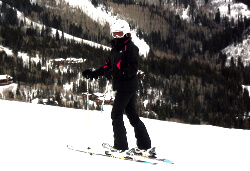 Tracy enjoying vacation earlier in the week before a fall on the last day resulted in five years of suffering.

Diagnosed with a concussion, Tracy should have felt better within a couple of weeks. Instead her headaches, brain fog, and dizziness worsened. Lights became so bright and people talked too loudly, their words buzzing in her ears. The closeness of crowds, even those consisting of only a few people, felt smothering and sent her heart racing with anxiety. Tracy’s thoughts started skipping, like continuous jump cuts in a film. It was as if someone had given her a different mind and body. She began to misjudge distance, stumbling over her own feet, her depth perception off.

The doctors changed her diagnosis to post-concussion syndrome and traumatic brain injury.

“I couldn’t keep up with life,” Tracy said. “The noise, the lights, everything was too much.” She began giving up what she loved to do—co-leading a mission trip to Honduras, volunteering as an usher coordinator, lay reader, and Sunday school teacher at her church. Soon she stopped going to church altogether and pulled into herself, spending more and more time sequestered at home.

Her hearing had become so highly sensitive that the doctor’s tests confirmed it near perfect—unlike before her skiing accident. Her damaged brain stem processed sound differently now. It was like being shouted at constantly through a loudspeaker. And worse, noise could send her into a seizure. Eventually she lost her driver’s license due to seizures, further isolating her. 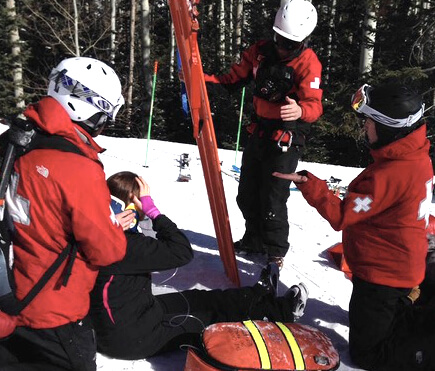 Being treated by ski patrol on the mountain, she felt excruciating pain on the right side of her head after her helmet was removed.

Desperate for some connection to the outside world, Tracy found Seacoast’s weekend services online and began to watch weekly. “That’s where I want to be,” she told her husband, Bradley. But she wasn’t sure how it could work.

While searching online about her condition, Tracy came across a conference being held by the Brain Injury and Psychological Associations. The registration fee was expensive and scholarships weren’t really a thing, but Tracy took a chance, and after a phone call, the association offered her a discount if she’d tell her story at the conference. 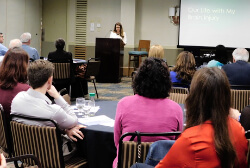 An opportunity to speak at a physician’s conference helped her write her testimony, and it changed the way doctors view patients with brain injuries.

Painstakingly Tracy wrote out her testimony. Another side effect from her injury was having difficulty saying what she meant and organizing her thoughts. But with Psalm 46:10 echoing in her mind, “Be still and know that I am God,” she stood under bright fluorescent lights and told her story. “No other patients were there, just doctors and specialists,” she said. “So hearing from me was good for them.” One doctor even followed her outside with tears in his eyes, saying she’d just changed how he would view his patients from then on. Another asked permission to recommend that her patients talk to Tracy, to know they weren’t alone. “As broken and inadequate as I felt, God was using me,” Tracy said. “Giving me purpose.”

In 2018, Tracy and her husband, Bradley, began attending Seacoast’s Mount Pleasant Campus, though it was a huge challenge for Tracy to be surrounded with so many people, under bright lights, and with such loud music. To make it possible, Tracy had to use custom-made earplugs, large headphones, and sunglasses. “But it was like I had to save up to go to church,” she said. “I couldn’t do anything during the week. It was worth it though. Every Sunday it was what I needed to hear.”

Then came the day God worked a miracle…

A Day of Healing

Sunday, July 28, 2019 started out rough. Tracy overslept, missing the 9:00 am service and then, while in bed trying to wake up and get moving, she spilled hot coffee all over herself and her iPad, and burned her leg.

“Do you want to stay home?” Bradley asked, as they cleaned up the mess and put a cold cloth on her leg. “We could watch online.”

On the way into church, Tracy learned that a prayer and healing service was to be held the following Wednesday. “I’d gone before,” Tracy said, “but it had been too overwhelming for me, and I’d left. I wanted to try again. But I kept asking myself, was it right for me to ask to be healed? God was clearly using my condition to help others, I didn’t want to question his will. I wanted to be obedient.”

Before entering the worship center, Tracy stopped to grab a coffee—not having gotten a replacement cup after the spill. Soon she and Bradley settled in to hear the message from guest pastor, Daniel Floyd. Before long, Tracy was writing all over her message notes in line with Pastor Daniel’s main points. It was a message that would lead her to a miracle.

When you start running after your calling, storms pop up.

Tracy wrote: I was so involved in my church, growing in my faith before I fell 5 years ago. All the challenges…all the storms have forced me to pull back from so much.

The enemy is more confident in your calling than you are.

Tracy wrote: I’ve been so confused on what my calling is. I feel inadequate to serve others like I used to. The enemy has me doubting myself.

Midway through the sermon, Tracy began fidgeting. The coffee had gone right through her, but she didn’t want to miss anything. So she stayed put.

“Fight through!” Pastor Daniel said near the end of the message.

Hearing it, Tracy decided she didn’t want to wait for the Wednesday healing service. She wanted healing right then. But it wasn’t until Pastor Josh Surratt came to the platform to lead everyone into response time, saying, “Maybe there’s something you want to be free of,” that Tracy knew exactly what to ask for.

“What do you want to do?” Bradley asked as response time began.

“Go up there,” she said, pointing to the prayer teams up front. But she had to pee so badly, goose bumps were rising on her arms. God, please stop this urge so I can be prayed for! 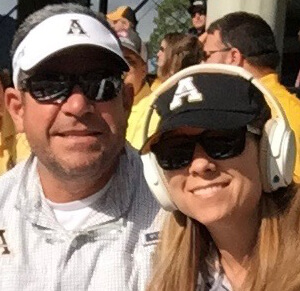 Lasting only a few minutes in the crowd noise, Tracy was able to attend an Appalachian State football game with her family.

Bradley led the way toward the front, but every team was praying for someone already, leaving them to wait near the stage where the music was even louder. Tracy thought she might fall to her knees right there in front of everyone. Trembling, she grabbed onto Bradley’s arm, looking from left to right. Who would pray over her? Would it work? She had to pee so badly, her right leg started shaking. And she felt the familiar embarrassment of wearing her big white headphones. Tears rolled down her cheeks.

Tracy looked straight ahead, needing to focus on something, someone—and that someone happened to be Brandon Lake, singing on the stage. She concentrated on his face and took a deep breath. Everything was going to be okay. And it didn’t matter who prayed over her because God would be the one doing the work.

Finally Bradley led her to a couple on the prayer team whose names were Brad and Kimberly. “I’VE HAD A TRAUMATIC BRAIN INJURY FOR 5 YEARS,” Tracy shouted to them. “AND I WANT TO BE FREE OF THESE HEADPHONES AND THE EARPLUGS UNDER THEM.” Brad and Kimberly put their hands on her headphones and took hold of her hands while her husband huddled them in. As they prayed over her, Tracy started crying and couldn’t stop. Something good was happening. God was working. She could feel it.

Afterward, Bradley led her to the candles and the cross, but Tracy didn’t know what to do, feeling strangely dazed. Seeing the stack of papers next to the cross, she took a piece and wrote EARPLUGS and HEADPHONES and stabbed it to the cross with a tack. Then taking a few steps away, she leaned against the wall. The music was still too loud, but in her heart, she knew it was done. She was free.

Slowly she removed her headphones and earplugs—and the loudness of the music almost knocked her off her feet. She closed her eyes. Thank you, God. Thank you. I believe you. I know it’s done. …And everything became softer. She opened her eyes, surprised to find the band still playing. But the sound had changed. God had done it! In awe, she listened to the music…clear and beautiful and unfiltered.

Running to Brad and Kimberly, she showed them the earplugs and headphones in her hands, thanking them again and again, and together, they laughed and hugged, and praised God.

The band continued playing as Tracy and Bradley returned to their seats to gather their things, the service over, but Tracy stopped, unable to leave quite yet. She just listened. Her legs weren’t giving out, her brain wasn’t shutting down. She’d never have to wear those headphones again. But then feeling a hand on her arm, she turned to find that the couple who had prayed for her had brought Pastor Daniel Floyd and Lisa Surratt to hear what God had done for her. She told them the whole story.

A while later, as they were finally leaving, Bradley asked, “So shouldn’t you go to the bathroom?”

A note from Tracy: The enemy tried to use spilled coffee, my bladder, fear, embarrassment, and doubt to keep me from the miracle God had waiting for me that day. But I need to tell you…just go forward! God will take care of the details. I showed up, I believed, and he freed me. I can now praise and sing. Life is no longer too loud.